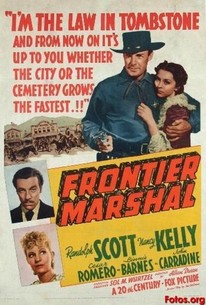 The second of three films based on the Wyatt Earp biography by Stuart N. Lake, Frontier Marshal stars Randolph Scott as Marshal Earp of Tombstone. Earp and his brothers enforce the law as much by reputation as by gunplay. Occasionally the marshal's efforts are complicated by his "friendly enemy" Doc Halliday (based on Doc Holliday and played by Cesar Romero), a consumptive gunslinger who runs the gambling activities in town. When a murderous outlaw (Joe Sawyer) invades Tombstone and kills Halliday, Earp is moved to action -- and the result is the gunfight at the O.K. Corral. A remake of the 1934 film of the same name, Frontier Marshal was itself remade by John Ford as My Darling Clementine (1946), with Henry Fonda as Earp and Victor Mature as Doc Holliday.

Ethan Laidlaw
as Tough
View All

Even the heroes' daring on behalf of justice has an ugly, raw blankness that Dwan films with a nerve-jangling clatter of graphic angles, leaving the fleeting moments of solitary contemplation all the more desolate.

There are no featured audience reviews yet. Click the link below to see what others say about Frontier Marshal!