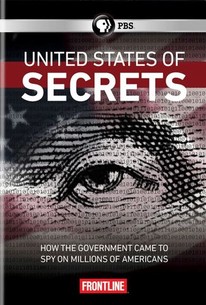 An explanation of the history of the massive National Security Agency surveillance program that started after September 11th, featuring remarks from intelligence insiders, cabinet officials and government whistle-blowers. Included: how the U.S. government came to monitor the communications of millions of Americans and to collect billions of records on ordinary people around the world.

There are no critic reviews yet for Frontline. Keep checking Rotten Tomatoes for updates!

There are no featured reviews for Frontline at this time.