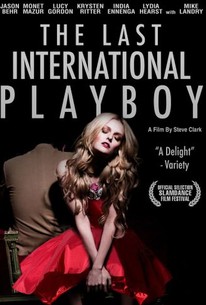 Roswell star Jason Behr assumes the role of a New York City playboy who sinks into a deep depression after learning that his childhood love is engaged to another man. Still haunted by his mother's recent suicide, professional charmer Jack Frost (Behr) is shattered to discover that his one true love is about to take the plunge -- but not with him. As Jack begins spiraling into a self-destructive cycle of whisky and reckless behavior, his best friends Ozzy, Scotch, and Kate struggle to find a means of jarring their depressed pal back to reality. Strangely enough, it isn't Jack's grown-up friends who offer him the most useful relationship advice, but his 11-year-old neighbor, Sophie, whose unusually wise and thoughtful words have a special way of helping the self-absorbed urbanite shake off the nostalgia and excess that threaten to consume him.

Lydia Hearst
as Stella
View All

They're deeply uninteresting people, thanks to a trite and far-fetched script. There's very little the actors can do to make them credible.

"He's having an existential crisis," explains Sophie. Too bad it's not a very cinematic one.

With its gorgeous cast and sharp HD lensing, Gotham-based production looks polished and makes good use of the city.

Mildly engaging with a scene-stealing performance by India Ennenga, but its often inorganic screenplay lacks an emotional core as well as credible character development.

Anyone who is even vaguely aware of New York's literary high society -- even from a casual thumbing of the New York Times' Sunday Styles section -- will realize this film is all posing and no pulse.

...it's kind of like Van Wilder with fewer laughs and a really horrible soundtrack.

There are no featured audience reviews yet. Click the link below to see what others say about Frost (The Last International Playboy)!