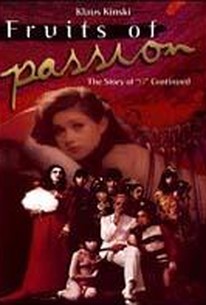 The premise fades in the viewer's gradually developing intrigue with Terayama's montage of sensual imagery, his exotically staged set-pieces which seem designed totally for the way they look and photograph.

The avant-garde Japanese director, Shuji Terayama, who likes to marry Freud and Marx in a veil of surrealism, buries them both in this excessively solemn, exotic nonsense.

Little more than an excuse to merge mainstream filmmaking with light pornography, hoping to capitalize on the controversy and cult success of the original.

The first one wasn't bad. This was.

There are no featured reviews for Fruits of Passion (Les fruits de la passion) at this time.