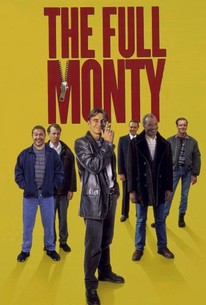 Six guys with nothing left to lose try losing their clothing for fun and profit in this international hit comedy. Gaz (Robert Carlyle) and Dave (Mark Addy) are two former steelworkers in the British industrial town of Sheffield who have been devastated by the economic downturn in their community. Gaz is threatened with losing visitation rights with his son if he can't pay his child support, while Dave feels emasculated by his inability to support his wife. One day, Gaz stops by a local pub for a drink and is told it's women only tonight -- the Chippendales male exotic dancing troupe is playing, and they are demanding a hefty cover charge. Gaz decides there's nothing a bunch of pantywaists from America can do that he and his pals can't do better, and decides to form his own crew of male strippers, called "Hard Steel." However, the local talent pool leaves a bit to be desired. Gaz isn't bad looking, but Dave is a bit heavy and very self conscious about it. Horse (Paul Barber) was probably hot stuff at Soul Night in the mid-70's, but his joints don't move like they used to. Guy (Hugo Speer) can't dance to save his life, but makes the troupe because ... well, let's say he and Dirk Diggler would have a lot to say to each other. Lomper (Steve Huison) is sometimes too busy attempting suicide to practice. And Gerald (Tom Wilkinson), their choreographer, isn't much on male exotic dancing -- ballroom dancing is more his speed. While "Hard Steel"'s performances are more amusing then enticing, for the first time since they lost their jobs the men have a reason to get up in the morning; joining the group has given them a circle of friendship, and a renewed sense of purpose. Combining broad comedy with believable and well-drawn characters, The Full Monty was a major box-office hit both in England and the United States and was nominated for Academy Awards as Best Picture, Best Director, and Best Original Screenplay. ~ Mark Deming, Rovi

News & Interviews for The Full Monty

View All The Full Monty News

Critic Reviews for The Full Monty

The Full Monty finds both pathos and laughs in its farfetched conceit, avoiding the pitfalls of sappiness and shtik. Odds are good you'll exit grinning.

It's a familiar show-biz routine but one that's spangled with happy surprises and sharp acting.

From this grim working-class prospect, The Full Monty creates a lovable comedy.

The Full Monty is feel-good comedy with none of the pejorative hints of innocuous blandness that term so often implies.

The Full Monty carries beneath its feelgood trajectory an exquisite air of gallows humour mixed with a dash of melancholy and a wee sprinkling of empathetic leftist politics.

Its social commentary, its unlikely but charismatic cast, and heartfelt but humorous writing has made it a film that many people find hard to forget.

Stephanie Watts
One Room With A View

Largely sweet and insubstantial, not so much "funny" as it is charming and grin-making.

Who knew male strippers could be so sweet?

Leaves the audience smiling and giggling, all the while painting a convincing and touching portrait of the downtrodden in England.

The premise of this British comedy, out-of-work male strippers, is contrived and calculated, but the film exudes charm and optimism.

Audience Reviews for The Full Monty

A great working class film, that has depth but also a comedic feel that will leave a giant smile on your face, you will also be moved to dance witht the great soundtrack!

This is a funny film - in part because these guys make the best of a horrible situation - most of Sheffield being thrown out of work when the steelworkers are all laid off.

The Full Monty is a good little comedy with a great cast. I very enjoyed the film, and thought it was a fine film for what it was. If you're looking for a charming comedy, The Full Monty may not be the masterwork everyone has claimed it to be. However, it is a well acted film with a feel good tone. The cast are very good and there's not one character that you dislike. This is a well directed film, one that really stands out. The film is very good, but I found that the comedic delivery was at times short. I felt that the gags fell flat at times, but in the end the film told a good story. The film has some pretty decent gags going through it, but there's never anything hilarious going on. I felt that the film was good because of the cast, and story, and it has some laughs throughout the film. As far as this film being the greatest British comedy, it's far from it. The film is worth seeing and it manages to be a memorable and must see film. The cast make this film work well enough. The script is well written, and The Full Monty is a smart, but flawed comedy that manages to entertain due to its diverse characters and good cast. This may not be the best comedy that every critic has claimed it to be, but it's still worth watching. Robert Carlyle and company are fun to watch on-screen. This is a well crafted film, and though it has its flaws, it's a must see. Brilliantly acted and directed, The Full Monty is a good spirited flick that is simply charming.