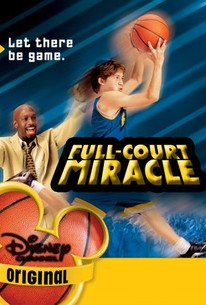 The made-for-cable biopic Full Court Miracle is the true story of Lamont Carr, here played by Richard T. Jones. A college basketball star, Lamont seems to be a shoo-in for the Philadelpha 76ers until he is permanently sidelined by a knee injury. Seeking out employment in his chosen profession, Lamont is invited to be head coach of the Philadelphia Hebrew Academy Lions, a Yeshiva team captained by Alex Schlotsky (Alex D. Linz). Despite the obvious cultural schism between the African-American Carr and his Jewish players, Jason is determined to pull the Lions out of the cellar and lead them to victory at the Liberty Basketball Tournament -- and as part of his strategy, he invokes the heroic example of Judah and the Maccabees. First telecast on the Disney Channel, Full Court Miracle was originally shown on November 21, 2003 -- coincidentally during Hanukkah week.

Jerome Williams
as Himself
View All

For a movie that purportedly touts notions of establishing the truth of your own identity, the script is surprisingly devoid of one.

There are no featured audience reviews yet. Click the link below to see what others say about Full-Court Miracle!