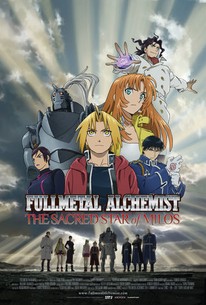 Fullmetal Alchemist: The Sacred Star of Milos, a new feature-length adventure into the world of an international anime sensation. A fugitive alchemist with mysterious abilities leads the Elric brothers to a distant valley of slums inhabited by the Milos, a proud people struggling against bureaucratic exploitation. Ed and Al quickly find themselves in the middle of a rising rebellion, as the exiled Milos lash out against their oppressors. At the heart of the conflict is Julia, a young alchemist befriended by Alphonse. She'll stop at nothing to restore the Milos to their former glory - even if that means harnessing the awful power of the mythical Philosopher's Stone. -- (C) Official Site

Critic Reviews for Fullmetal Alchemist: The Sacred Star of Milos

Fans, go be with your people. Others, approach cautiously.

The widescreen canvas is an improvement over television's limited expanse. But if you're not among the indoctrinated, don't bother.

This is a very intelligent, well-plotted story - and my hunch is that we have not seen the last of our heroes.

At some point you have to ask: When are fantasy fans going to tire of heroes and villains throwing bolts of energy at each other? Give it a rest already!

Like a lot of anime, the movie remains entertaining even when you have no idea what's going on.

The movie is gorgeously animated and has many powerful images and ideas.

Exhilarating, intelligent and compelling with plenty of surprises and dazzling animation.

This is a gripping mystery in its own right, and even retains the original Japanese voice actors (with subtitles).

The Sacred Star of Milos manages to be an entertaining and faithful expansion on the original material while being inconsequential to it.

It's silly and excessive, but Fullmetal Alchemist occasionally strikes a note of adolescent truth, as when Ed wishes for "some way to get our bodies back."

Pic upholds the series' trademark use of pacey action and well-defined characters struggling against oppression and seeking answers to spiritual questions.

Audience Reviews for Fullmetal Alchemist: The Sacred Star of Milos

A little more violent than what I'm used to in the FMA series and a little cheesy to be honest. Maybe because the writers had to rush through things as they only had roughly 2 hours to tell this story as opposed to an entire series. I think this was the reason I was iffy on watching an FMA movie and I think my experience backs it. The action was great but some of the animation, like the characters' hair, look sloppily done. Perhaps my expectations are too high. The villain reminded me of the villain from the Cowboy Bebop movie but the animation was so much more fluid and well-done and the violence didn't just come out of nowhere. You were expecting it. Entertaining but it pales in comparison to both FMA series.

Pretty interesting, but formulaic and simple. I haven't finished the series yet.