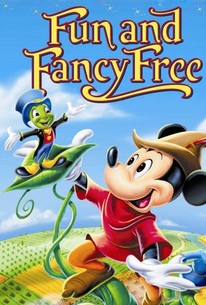 Critics Consensus: Though it doesn't quite live up to its title, Fun and Fancy Free has its moments, and it's a rare opportunity to see Mickey, Donald, and Goofy together.

Critic Consensus: Though it doesn't quite live up to its title, Fun and Fancy Free has its moments, and it's a rare opportunity to see Mickey, Donald, and Goofy together.

A blend of live-action and animation, Fun and Fancy Free is comprised of two distinct tales linked by additional footage featuring Jiminy Cricket. Disney had been planning to use each story for separate feature films but the involvement of the United States in WWII disrupted his plans and the stories were shelved until after the war. The first is a musical story based on a children's story by Sinclair Lewis and is narrated by Dinah Shore, who also sings. It is the tale of a sad little circus bear named Bongo who is adored when performing but ignored after the show. Tired of travelling and being mistreated, he escapes into the forest where he discovers that life in the wilderness is not as free and easy as he thought. Despite the obstacles awaiting him, Bongo manages to find the thing he most longed for -- true love. By contemporary standards, the story is almost 'unbearably' sweet, but it should be remembered that such candy-coated fluff as "Bongo" was the remedy war-weary audiences needed to lift their spirits. The second tale is more zesty thanks to the peppery repartee between ventriloquist Edgar Bergen and his two dummies Charlie McCarthy and Mortimer Snerd. Together the three tell would-be Disney child star Luana Patton, a story based on "Jack and the Beanstalk" featuring Mickey Mouse, Donald Duck and Goofy, who climb a magic beanstalk and try to retrieve a stolen singing harp to restore wealth to their impoverished kingdom. In 1997, to commemorate the film's 50th anniversary, it was released on video tape in a restored version (the executive producers in charge of restoration were Phil Savenkic and Harry Arends) that has brought the colorful animated sequences back to their original depth and vibrance. This video version also contains a brief but informative documentary hosted by noted film historian Leonard Maltin and narrated by Corey Burton at the end that gives the fascinating history of the films. It also contains rare footage of the making of the films and a priceless segment in which Walt Disney performs as Mickey Mouse. "Mickey and the Beanstalk" was the last time Disney provided his voice.

Anita Gordon
as The Singing Harp

Billy Gilbert
as Willy the Giant

The Dinning Sisters
as Themselves
View All

The whole picture peters out and becomes as oddly off-balance and inconsequential as its title.

While the emphasis is more on the first part than on the second part of that compound, it's okay.

Fun And Fancy Free is a mixed bag with more than enough interesting material to make it worth seeing, even if it falls short of Disney's shameless self-praise.

Bland, bland, bland and the live action sections don't work and are awkward.

1947 Disney animated classic has some violence.

[Blu-ray Review] Disney's 2-in-1 Blu-ray release of "The Adventures of Ichabod and Mr. Toad" and "Fun & Fancy Free" is an irresistible deal that should become a mainstay in any Disney fan's high-def library.

If it wasn't already obvious from glancing at the studio's other work from around the same period, this would be proof enough that the steam was starting to go out of Disney's art.

Mickey and the Beanstalk is the classic here, and worth the price of the DVD.

An uplifting and sweet animated package film that combines music and narrative in ways superior to Make Mine Music, Disney's previous effort, and has two very nice stories - too long for shorts and too short for features - that are worth our time.

This was one of my favorites as a child, Bongo is just one of those things that has stuck in my head all these years.

edgar bergen did one of his best roles and he is the one who interested me in becoming a ventriloquist, im not anymore, but its still fun to watch him narrate the ending parts of the movie