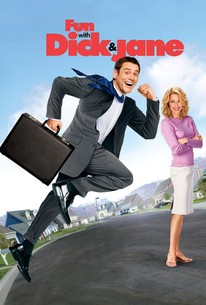 Critics Consensus: This muddled comedy has a few laughs, but never sustains a consistent tone.

Critics Consensus: This muddled comedy has a few laughs, but never sustains a consistent tone.

Critic Consensus: This muddled comedy has a few laughs, but never sustains a consistent tone.

Fun With Dick and Jane Videos

Fun With Dick and Jane Photos

A not-so-ordinary family finds a new way of paying the bills in this comedy. Dick Harper (Jim Carrey) and his wife, Jane (Téa Leoni), would seem to have it made -- Dick has a high-paying job, they live in an expensive house in the suburbs, they have two luxury cars in the driveway, and a housekeeper, Blanca (Gloria Garayua), to help look after their son, Billy. But Dick and Jane's fairy-tale life crashes head-on into reality when the firm Dick works for turns out to have been using unscrupulous accounting methods to disguise the fact they've been losing money hand over fist, and Dick has been made the fall guy for some of their dirty dealings. Suddenly flat broke, Dick and Jane must find a new way to support their lavish lifestyle, and in time they discover just the thing -- crime. A remake of Ted Kotcheff's 1977 hit (which helped re-launch Jane Fonda's screen career), Fun With Dick and Jane also stars Alec Baldwin, John Michael Higgins, and Angie Harmon.

News & Interviews for Fun With Dick and Jane

View All Fun With Dick and Jane News

Critic Reviews for Fun With Dick and Jane

A gummy remake of the George Segal/Jane Fonda 1977 comedy, this is evidently conceived as a showcase for Carrey's waning talents, but it suffers from a mouldy premise and the slightly unsavoury underlying message.

If you are one of the many out of work right now, try this movie for a good laugh.

A razor-sharp satire on class struggle and the evaporating America dream, which adroitly masquerades as a screwball star turn.

If fun means money, this is near bankrupt.

Dick and Jane thereby emerge comically and sentimentally as the unlikeliest of collectivist crusaders.

Carrey delivers farce when what is needed is satire.

Parisot's film is bright and cold, exuding a sense that around every corner lurks catastrophe, despite all the conspicuous wealth.

Fun with Dick and Jane is an extended Enron joke used to give Jim Carrey plenty of opportunity to mug for the camera. Everything else is more or less perfunctory to that.

Consider it a signed confession of remake rape when a "produced by Jim Carrey" credit appears atop his noodle-limbed exaggeration of "I Believe I Can Fly." his corporate-greed satire doesn't just lack bite. It lacks gnaw. It even lacks nibble.

The downward mobility of the middle class straight to the poverty level, or crime often not as evil, but rather economic desperation, are plot points hardly likely to sit well with those who control this economy and profit from it.

An entertaining and zippy 87 minutes.

Audience Reviews for Fun With Dick and Jane

Compared to most of Carrey's comedies, at least this one tries to do something different and include a certain amount of thoughtfulness, but it is very strangely paced and the laughs simply aren't frequent enough.

I didnt enjoy this movie that much, it was more annoying then actually funny. Not a bad cast but the storyline and Plot is just silly. I dont think its even a movie worth wasting your time watching!

My least favourite Jim Carrey movie. Altough it amused me enough to say it was worth my while, there was something really off about its endeavours to evoke laughter. Carrey does the best he can, so he can't be blamed for it. No, the problem is traced to the lackluster script. There are a few scenes where I came close to a genuine chuckle, but on the whole it's so flat that I felt indifferent to watching it. The only reason I continued, was in the naive hope that it would get better somehow. Sadly though, that never happened, which once again affirms my theory that all the good comedy writers died off at the turn of the millenium (look at what befalled The Simpsons for example, and you'll know that I'm right). Because while we in the 90's got great Carrey flicks like The Mask and Dumb and Dumber, we now have to settle for mediocracy like this and Yes Man. A shame to be sure, because with talent like Jim's, he deserves a lot better.

Remember The Mask? The film that became so popular because of Carrey's physical comedy performances? Fun With Dick and Jane is just like that. It's not as funny neither does it have any character development but trust me. It's funny.

Fun With Dick and Jane Quotes