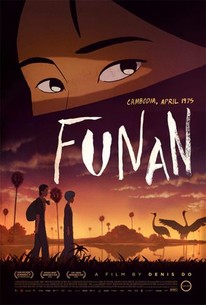 Cambodia, April 1975. Chou is a young woman whose everyday world is suddenly upended by the arrival of the Khmer Rouge regime. During the chaos of the forced exile from their home, Chou and her husband are separated from their 4-year-old son, who has been sent to an unknown location. As she navigates her new reality, working in the fields day and night under the careful watch of soldiers, and surviving the small indignities and harrowing realities of the increasingly grim work camps, Chou remains steadfast in her determination to reunite her family - even if it means risking everything. Winner of the top prizes at the Annecy Animation Festival and the Animation is Film Festival, Funan is a searing and remarkable debut from filmmaker Denis Do, who uses his own family history as inspiration for a thrilling story of love, loss and enduring hope in the most trying of times. Featuring the voices of Bérénice Bejo (The Artist) and Louis Garrel (The Dreamers).

Luminous and immersive, at times overwhelmingly so, this film is a realist's ode to the hope that remains after one has survived the unimaginable.

It's an education suitable for both children ready to see the world's shadows, and for adults who may still not comprehend Southeast Asian history beyond the Vietnam War.

"Funan" is a stunning piece of animation in which the beauty of the visuals and the horror of the situation are inextricably intertwined.

Funan is a piercing, personal look at historical events and the overall effects of war, and the medium through which it's told is a surprisingly effective one.

Do demonstrates a masterful amount of restraint, and his narrative minimalism maximizes the emotional and intellectual power of the story.

Those who go into the picture with clear eyes and focused minds will appreciate the singularity of what Do has achieved here.

Yet, for all this narrative convenience, Do manages to lead his intimate portrait toward an affecting crescendo.

This film is a beautiful and moving tribute not just to Do's mother, but also to Cambodia and its people.

It was devastating in the right kind of ways. Beautiful. One of the best films of the year

It's during the film's final half hour, when Chou finally flees in search of her child, that the tension mounts and the emotional power of the film really kicks in.

A reminder of just how powerful animation can be in presenting a message that may be too grim or difficult to do in live-action.

There are no featured reviews for Funan at this time.