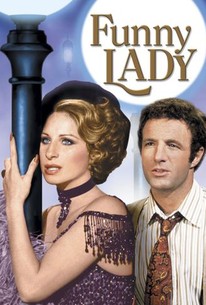 Barbra Streisand's 1975 follow-up to her star-making 1968 vehicle Funny Girl is a lot more worthwhile than most movie sequels. Funny Girl was a fanciful retelling of the first forty years or so in the life of fabled comedienne Fanny Brice (1891-1951); Funny Lady picks up where the first film leaves off, following Fanny into the 1940s. Far more sophisticated and imperious than she'd been in Funny Girl, Streisand's magnetic performance compensates for her character's decreased charm. Fanny's first husband, gambler Nick Arnstein (Omar Sharif), makes a few token appearances, while the lion's share of the film's romantic angle is dominated by Fanny's second hubby, impresario Billy Rose (James Caan). The best sequence involves a disastrous out-of-town tryout for one of Fanny's stage vehicles, replete with collapsing sets and a runaway bull. Most of the songs included herein are old standards, with the notable exceptions of Kander and Ebb's "How Lucky Can You Get?" and "I Like Him/I Like Her". The film was produced by Ray Stark, the real life son-in-law of Fanny Brice.

Don Torres
as Man At Wedding

Funny Lady is a big, messy flop of a movie that's almost cruel in the way it invites our memories of Funny Girl and doesn't match them.

The Funny Lady filmmakers weren't satisfied to churn out a swell old musical with lotsa sight gags and a few neat tunes. They've turned their airy bubble into an oversized balloon of a movie, pumping it full of hot air... until it seems fit to burst.

The beginning of Funny Lady is fast paced, beautiful and filled with promise: unfortunately the good times evaporate all too quickly.

Ranges from mildly to vastly distasteful.

But here's the strange thing about Funny Lady: it somehow underplays [Fanny] Brice. Quite a nonsensical statement for a film literally about her.

A strange anomaly of a film that rarely works and often bores to the point of exhaustion, but how thrilling that a pair of committed actors can pay their own amusement forward in a synergy that defies most traditional outcomes.

Her superfans might disagree, but Barbra Streisand, some one-liners, and a few show tunes do not a great movie make.

Not so funny, or ladylike.

A much deserved sequel to the first movie :) Barbara again amazes us with her amazing acting & singing skills :) This is another amazing marvel in film history :) James Caan is also incredibly exceptional in this movie as Fanny's love interest :)

Okay sequel to the wonderful Funny Girl is missing several key ingredients that hold it back from the level of the first film. The most important would seem to be director William Wyler, who kept the first film moving even at an extended length this one plods here and there. The supporting characters here aren't as enjoyable or fleshed out as in the first, where is Kay Medford's wonderful mother? Most of the music is excellent, the problem with most is the staging. We only get snippets of many of them like "More Than You Know" and "Am I Blue" and several of the ones we do get full versions of are muddled, the worst is "It's Gonna Be a Great Day". Barbra gives a great rendition of the song but it's drowned mostly in long shots and the sound of the shuffling feet of the surrounding dancers. "Let's Hear It For Me" is a blantant ripoff of "Don't Rain on My Parade". There is a haunting version of "If I Love Again" though. Caan is alright as Billy Rose but he and Babs share little chemistry and he mostly shouts his part hardly making the most romantic leading man. As for Streisand, who made this under duress from a contract obligation, she is of course loaded with talent but seems brittle and haughty, two things Fanny Brice never was. The production design is excellent and some of the costumes are eye popping, the feathered dress in itself is amazing, but they are dressing up an average affair. Not a waste of time just don't go into it expecting the high quality of the first film.