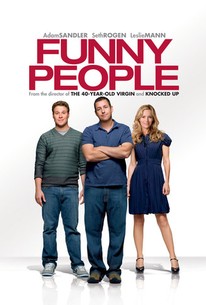 George Simmons is a famous stand-up comedian, who learns that he has a terminal illness and less than a year to live. When, he meets Ira, a struggling comedian at a comedy club where both the comedians are performing, George hires Ira to be his personal assistant and opening act at his performances. The two forge a close friendship as George helps Ira with his career and Ira helps George find closure in his legacy. However, when George learns that his disease has gone into remission and an ex-girlfriend re-enters his life, he's inspired to reevaluate what is important to him and what truly gives meaning to his life.

Ray Romano
as Himself

Sarah Silverman
as Herself

Dave Attell
as Himself

Paul Reiser
as Himself

Andy Dick
as Himself
View All

This is a smart movie, one that's very unexpected.

Funny People is funny, moving, dramatic, and alternately hilarious. It's a bit like a stand-up dramedy.

The film is also an admiring portrait of the artist as Californian solipsist -- unburdened by personal ties or even the need to seem intelligent, free to follow his own random, petty, moment-by-moment train of thought.

Funny People has some very funny moments but don't expect a joke fest. And don't expect a tight film either. At two and a half hours, it is not one but two films... and at least one of them shouldn't have been made.

Despite its flaws, this film has a beguiling candour and reflectiveness which is new for Apatow and Sandler.

A boisterous first hour builds good will. Strong performances sustain us through the next uneven 90 minutes.

Feels like it is both a love song and a tribute to Apatow's life journey and the people in it through their joys, sorrows, quirks and idiosyncracies.

Despite the lengthy run time, Funny People gives us one of Adam Sandler's best performances so I can't complain.

A wise and moving look beneath the mystique of celebrity.

Here's a film full of rich characters who are interesting, funny and believable. It's handled with great care by Apatow and the result is his best film to date.

I wouldn't even describe this movie as a comedy. I would describe it as pointless. I know where they were trying to go, they just didn't get there.

Perhaps the film's failure lies in the level of expectations that one has of Apatow... [Full review in Spanish]

This movie shows a more restrained and, dare I say, mature Judd Apatow. That's not a bad thing actually, but I think he needs to work at it some more. Because as good as this movie is, and as much as I liked it, it's got some flaws. For one thing, it's a tad too long and parts of it really, really drag. I didn't mind that this movie wasn't really a balls out comedy, but I think it's gonna alienate the audiences who haven't seen it yet. Parts of it are pretty funny, but most of the humor is quite dark, and rather awkward and uncomfortable. Maybe this film is more realistic as a result. Not that real life isn't funny, but seeing as how this movie is more dramatic, it carries that weight of reality that most people try to get rid of through comedy. I enjoyed this aspect for the most part. Having enjoyed Sandler's previous dramatic performances, I found a lot to like here. I'm just afraid that others make get turned off by the fact that much of this movie carries a lot of pain with it. The performances from the others are also good, be they the Apatow regulars, or the others such as Jason Schwartzman and Eric Bana. So yeah, I liked this, and think it is worth seeing, but don't expect it to be like Apatow's previous works, otherwise you'll probably be really disappointed, unless you don't care for his other films, which means you may like it, unless of course you don't like comedy done in the style of The Office.

This dark comedy (dramedy?) contains my favorite acting roles for both Sandler and Rogen. Its a story of struggle and regret, and oh by the way, stars comedians. I like this side of Sandler and Judd Apatow. Its more emotional than you expect from Apatow, and definitely not an Adam Sandler comedy.This is a side of Sandler you don't often see;I compare it to Jerry Lewis' role in King of Comedy. It isn't "hilarious" or "uproariously funny" like some may expect. Like Jim Carrey's earlier The Cable Guy, it may have been misrepresented. Oddly, both films star Leslie Mann. Funny People is flawed but a good drama considering the cast. This is an excellent Apatow film, closer to Freaks and Geeks than Knocked Up and much of his later work.

As always for all Judd Apatow movies, the screenplay is hilariously funny and witty. Many will say that this is Apatow's darker movie and is low on the amount of laughs, but within it is a non-Hollywood approach to portray and thoughtful and important message. I enjoyed this movie and some jokes hit the spot. I recommend watching this movie!

I was very much looking forward to seeing Funny People. When I did, I was very disappointed. The film though has some decent laughs, but unfortunately doesn't what it wants to be, and goes on longer than it needs to. The film had a few good performances, and at times was funny; unfortunately the film was too long and for the most part was very boring, and dull. I lost interest after a while; found Funny People to be quite a mediocre film. The length that this film goes on for is painful, and it's sufficient enough for anyone to lose interest. Halfway through the film the film becomes a drama and the comedy is kept at a minimum. This is a dramedy that just doesn't cut it. This is one of Judd Apatow's worst films in my opinion, and though it had a few comedic parts, Funny People proves that Adam Sandler is a talentless "comedian". Funny People really doesn't cut it, and falls flat overall. I think the film started strong overall, unfortunately halfway through the film, the film fell apart, and became a boring. This film is a perfect example of how filmmakers can't get a clue on how to effectively conclude a film, thus they added an additional hour that for me, anyways, was terrible and really didn't fit the film. The soul existence of the additional hour was to add a sense of drama to the film, and in the end, it didn't work, and it was pretty cheesy. This film would have been better if they trimmed an hour of footage and kept the film simply. Unfortunately by the films conclusion, Funny People is all over the place, and doesn't know whether it wants to be a comedy or drama, straight forward drama. I understand it's a dramedy, but this film was poorly conceived. In the end, it tries too hard at being a film that tries to blend two genres into one film and the results are very mediocre.