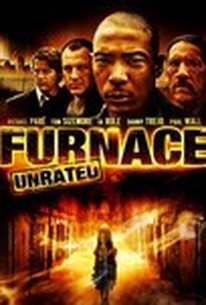 It started as a murder-suicide case at a maximum security prison, but as Detective Michael Turner (Michael Paré) investigates, he finds that the truth is more terrifying. Something evil stalks the facility, a demonic force that kills indiscriminately. Turner races to stop the entity before it kills again, but how do you fight an enemy you can't see? Ja Rule and Tom Sizemore co-star in this atmospheric horror film.

There are no critic reviews yet for Furnace. Keep checking Rotten Tomatoes for updates!

A pretty interesting story...but the acting was pretty bad. It did have some pretty scary/creepy imagery, though. Up there with "The Jailhouse."

.This is one of the better horror flick's of the modern era. Make up is great, right from the start the Gore scenes are spectacular. Great story line. My only disappointment is that it didn't win any awards i.e. Fangoria. .. Should have easily been in the 8 films to die for series. 4 1/2 stars