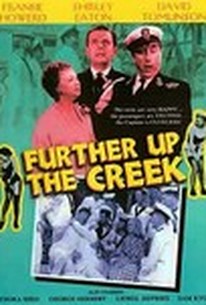 This hastily assembled sequel to the popular British service farce Up the Creek finds David Tomlinson returning in the role of Lt. Fairweather, skipper of the not-so-good ship Aristotle. This time, however, Fairweather's enterprisingly larcenous bos'un is played not by Peter Sellers but by music-hall favorite Frankie Howerd. The plot finds the Aristotle being sold to a mythical middle-eastern country. Assigned to deliver the vessel to its new owners, Fairweather discovers that his faithful bos'un has once again sold tickets to passengers, in direct violation of regulations. The resulting comic complications are as predictable as they are hilarious. ~ Hal Erickson, Rovi

Amy Dalby
as Edie
View All

Critic Reviews for Further Up the Creek!

There are no critic reviews yet for Further Up the Creek!. Keep checking Rotten Tomatoes for updates!

There are no featured reviews for Further Up the Creek! at this time.

Further Up the Creek! Quotes