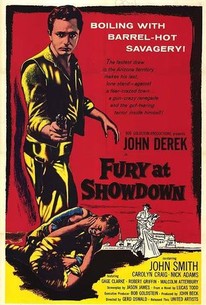 Fury at Showdown stars John Derek as a gunfighter who hopes to hang up his guns and live the peaceful life of a cattle ranch. Settling down on his new spread with his brother Nick Adams, Derek finds that he can't live down his reputation. When his brother is murdered on the orders of land-grabbing lawyer Gage Clarke, Derek is forced to strap on his guns again. But Clarke, one step ahead of our hero, tries to save himself from prosecution by kidnapping Derek's girlfriend Carolyn Craig. As the title indicates, a showdown is inevitable, though not as predictable as one might suspect. Fury at Showdown was adapted from a novel by Lucas Todd.

Tom McKee
as Sheriff of Buckhorn
View All

Critic Reviews for Fury At Showdown

There are no featured reviews for Fury At Showdown at this time.