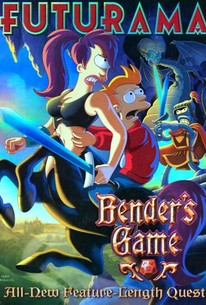 The price of spaceship fuel is skyrocketing, leaving the Planet Express crew with the treacherous task of infiltrating the world's only dark matter mine to acquire the precious fuel that keeps their world running smoothly. But deep beneath the mine, far under the surface, is a medieval land of fantasy where dragons roam free, sorcerers cast powerful spells, and drunken knights who bear an uncanny resemblance to Bender stumble about aimlessly. Featuring the voices of former Star Trek star George Takei and famed comic impressionist Rich Little.

Rich Little
as Himself

George Takei
as Himself

RT on DVD: Get Smart, Futurama: Bender’s Game and the Obama DVD Controversy

The story itself is clearly cut up into parts that would have played on television with ease, therefore containing several extraneous subplots that don't always fit.

This being Futurama, those jokes -- even the silliest ones -- have their weird little complexities.

Futurama is like sex - even mediocre sex is better than no sex at all . . .

Spanning the length of 4 episodes, this 80 minute piece of work goes fantasy with Dungeons & Dragons to trigger the spark for the rest of the movie. The writing comes across as a bit lazy and less original, which isn't exactly good news; however, the amusement level is still in existence.

The comedy has its share of laughs, mostly in the film's final act when it decides to parody The Lord of the Rings. Fry definitely has his moments here. Actually, he has his moments everywhere.

There are a lot of guest stars to provide voices for out of the blue characters, but it is the usual cast of Billy West, Katey Sagal, and John DiMaggio among others getting the job done.

As a whole, Futurama: Bender's Game feels a little less like "Futurama," but that's okay.

Oh my nerd references.... another giftie for the fans. I must say I do like all of the references from the series put in the movies. It's subtle and part of that 'goft to the fans' thing.

Enjoyable for the most part.

Bender's Game is my favorite of the three Futurama movies that I've seen so far. It still can't match the cleverness and humor of the original four seasons, but at least it has an amusing plot and a quite a few moments that brought a smile to my face. It did end rather abruptly, but this combination of D&D and Tolkien fantasy (among other things) is a much more enjoyable than the first two attempts at rekindling the Futurama magic.