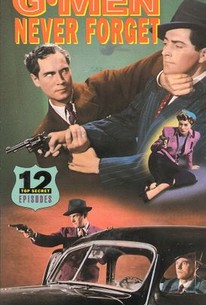 The popular G-Men of the 1930s made a comeback in this action serial produced by Republic Pictures, starring television's future Lone Ranger, Clayton Moore. The serial, however, was not so much a showcase for the pleasant if lightweight Moore, but rather a welcome opportunity for the studio's most effective villain, the near-legendary Roy Barcroft, to strut his considerable stuff. Barcroft plays a notorious gangster who escapes from prison, and via plastic surgery, assumes the identity of the local police commissioner (also Barcroft), who he has kidnapped. The masquerade is so effective that government agents Moore and Ramsay Ames fail to catch on until the 12th and final chapter, logically entitled "Exposed." The serial was re-edited into a feature version entitled Code 645.

There are no critic reviews yet for G-Men Never Forget. Keep checking Rotten Tomatoes for updates!

There are no featured reviews for G-Men Never Forget at this time.