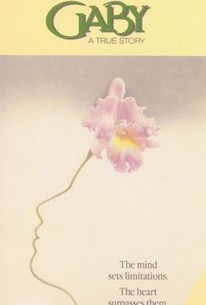 Gaby: A True Story is about a young woman -- the child of rich European refugees living in Mexico -- who was stricken with cerebral palsy at birth. Though her body is completely paralyzed, her mind is unaffected, and she is able to become a college graduate and an acclaimed author. Rachel Levin won acclaim in the title role, but Norma Aleandro received an Oscan nomination for Best Supporting Actress.

Paulina Gómez
as Gaby at The Age of 3

Enrique Lucero
as Minister of Education

Enrique Kahan
as Profesor At Exam

Manuel Kaminer
as Rabbi At Funeral

Cecilia Tijerina
as Lupe
View All

There are no featured reviews for Gaby: A True Story at this time.