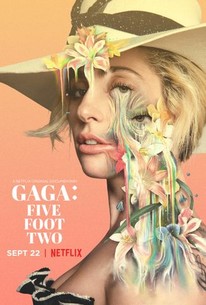 Critics Consensus: Gaga: Five Foot Two offers an absorbing glimpse of its superstar subject's backstage life, albeit one weakened by inconsistent focus and a dearth of performance footage.

Critics Consensus: Gaga: Five Foot Two offers an absorbing glimpse of its superstar subject's backstage life, albeit one weakened by inconsistent focus and a dearth of performance footage.

Critic Consensus: Gaga: Five Foot Two offers an absorbing glimpse of its superstar subject's backstage life, albeit one weakened by inconsistent focus and a dearth of performance footage.

In the Netflix original documentary Gaga: Five Foot Two, Lady Gaga offers a vulnerable look of her life during one of the most pivotal periods in her career yet. Directed by Emmy (R)-nominated filmmaker Chris Moukarbel (Banksy Does New York, Me at the Zoo), the film is shot in the style of cinema verité, giving viewers unfiltered, behind-the-scenes access as Gaga spends time with close friends and family members, records and releases her 2016 album Joanne and, deals with personal struggles. Moukarbel's compelling portrait captures Lady Gaga's life over a eight-month period. On top of professional triumphs, viewers will see her cope with intense emotional and physical pain. Other moments reflect more ordinary aspects of her life, whether it's attending a family christening, visiting her grandmother or cooking and playing with her dogs at home. The film may help viewers understand how all of these experiences contribute to Gaga's art - and how, in just a few years, the 5-foot-2 performer has become such a relatable and beloved figure worldwide

Gaga is on volatile form... yet can be excused a few nerves given that she will be performing in front of a global audience of 117 million, and there's enough self-awareness to temper the divadom.

Gaga: Five Foot Two isn't quite sure what kind of documentary it wants to be.

... for now, Gaga is asking not for applause but understanding.

Five Foot Two never quite shakes the feel of a longform advert for Gaga's new phase that's preaching to the converted.

Manages to create a sense of intimacy and revelation, even as we sense that there is really no such thing as an unguarded moment for Lady Gaga.

There's a noirish glamour ... Conversely, there are moments of raw and casual power.

She takes her career very seriously and always tries to push herself with each project. Even if you don't like her music, you cannot deny how gifted she is...

As far as feature length advertisements go, it's a slick and well-produced one, but to pretend it's anything more than a carefully crafted bit of career reinvention would be willfully deluded.

When you're an icon of this stature, the voyeur in us wants to get to know the person behind all this glamorous machinery. Mourkarbel delivers that glimpse in spades.

But aside from the story about her aunt and a few brief mentions about her split from Taylor Kinney, there's not an arc to the documentary, let alone stakes.

An ironic sort of vanity piece in that it tries to be such an anti-vanity piece -- bluntly intimate, rather than a peek behind the curtain -- but it feels honest all the way.

There are no featured audience reviews yet. Click the link below to see what others say about Gaga: Five Foot Two!