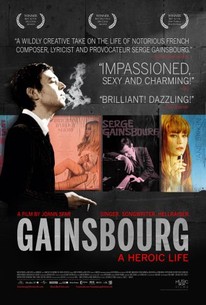 Critics Consensus: It might be thinly written and messily made, but Gainsbourg: A Heroic Life is also appropriately glamorous and intense -- and powerfully led by a gripping performance from Erik Elmosnino.

Critics Consensus: It might be thinly written and messily made, but Gainsbourg: A Heroic Life is also appropriately glamorous and intense -- and powerfully led by a gripping performance from Erik Elmosnino.

Critic Consensus: It might be thinly written and messily made, but Gainsbourg: A Heroic Life is also appropriately glamorous and intense -- and powerfully led by a gripping performance from Erik Elmosnino.

Comic book artist Joann Sfar interprets the life of '60s pop star Serge Gainsbourg (Eric Elmosnino),1921-1991, beginning with his childhood years in Nazi-occupied Paris, through his early years as a painter and jazz musician (brushing shoulders with Boris Vian), to his life as a wildly popular singer-songwriter, notorious bon vivant, and lover of some of the world's most glamorous women. Gainsbourg's two-sided personality (narcissistic and self-loathing) and his over-the-top antics with Brigitte Bardot (Laetitia Casta), Jane Birkin (Lucy Gordon), and beatnik icon Juliette Gréco (Anna Mouglalis) share the screen with a giant puppet alter-ego: a scary, libidinous bad-boy who personifies all of Gainsbourg's worst proclivities. -- (C) Music Box Films

Ophélia Kolb
as The Model

In conjoining Jewish heritage and classic French chanson, Gainsbourg celebrates the hybridity of contemporary French culture, while its combination of realist narrative and poetic animation make it both a touching biopic and an inspired musical.

It's a comic-strip version of one man's life and times, but it's tres cool.

While the movie's on a roll, it's zesty, engaging and frisky.

In short, Gainsbourg: A Heroic Life is a charmer.

French pop star Serge Gainsbourg was as much iconoclast as icon, so it's fitting that this fanciful biopic is both affectionate and irreverent.

Sfar, perhaps understandably, adores the legend of Serge Gainsbourg too much to make the whole nicotine-infused picture anything greater than what it is.

Gainsbourg is often just the right side of uncomfortably intimate, but that's what makes it such a magnetic film.

It's as surprising and unconventional as the man himself -- but that doesn't mean it serves him well.

Great songs, beautiful girls, lovely costumes and an artist in a constant state of flux are emphasised in Joann Sfar's imaginative, beautiful and suitably bizarre musing on the life of Serge Gainsbourg.

If there's one thing that Joann Sfar's Gainsbourg told me, it's that he smoked...a lot. And sometimes, he didn't shave for a few days... However, this was about all the insight provided by Sfar's competent effort.

The self-consciousness of identity, in the form of that puppet, inevitably gets in the way of the storytelling.

Sfar is helped no end by an astonishing performance from Eric Elmosnino, who also performs many of the songs on the soundtrack.

This charming biopic about Serge Gainsbourg is definitely not special, and I really don't know what is so heroic about him, but it is a delight to see how he wrote some of his songs and met the women of his life, in a surreal and stylish depiction of part of his existence.

Slightly surrealistic biopic covering the life of a French folk/rock icon, the hard-drinking, hard-smoking Lothario Serge Gainsbourg, with a scary puppet doppelganger on hand representing his inner demons. The experimentalism and some dead-on portrayals of Gainsboug's glamorous lovers---Juliette Greco, Brigitte Bardot and Jane Birkin---make for a lively tribute to the rakish singer's rebel spirit.

I could care less about the life of Gainsbourg and this movie really didn't change my mind. It mainly just follows the exact same formula of The Doors, but just with a far less interesting subject. It's almost baffling how they could get away with telling such a mirrored story when I'm sue the two people couldn't have been different. Sometimes this looks like a filmed play, due to the odd lighting and desire to always frame the action in exactly the same way. It also seemed to drag for a ridiculously long time for being just a 2hr movie. I'm not someone who is a die-hard fan of French film-making and this seemed to posses all the traits I don't care for. The necessity for imaginary puppets, goofy narrative breaks and oddly paced scenes didn't help me enjoy this anymore. The one thing I did happen to enjoy was all the beautiful women, but that's hardly something you can compliment the movie itself for. Eric Elmosnino really doesn't do anything interesting here; he just sort'v mopes his way through the movie and doesn't even become interesting until the very last stretch of Gainsbourg's life. I'm sure there will be people that eat this up and just love this biopic, but I really found it to be pointless and terribly executed.

Very interesting untold true story of famous French singer-songwriter Serge Gainsbourg as well as this is based on the graphic novel by the French writer-director of the film, Joann Sfar. The Gallic equivalent of Frank Sinatra, Noel Coward and Shane MacGowan, Serge Gainsbourg was unique who redefined '60 and '70s national culture. It's incredible, then, what Sfar, a French comic-book artist, has managed to capture here. Eric Elmosnino miraculously nails Gainsbourg's louche, lupine suavity and beguiling vulnerability, and scenes of the composer's early life - a Fellini-esque fairytale where he's tutored by his vampiric puppet alter-ego, La Guele - are truly powerful. Inexplicably, the second hour lurches into rock biopic cliches - drugs, bad wigs, and the cheesy recreation of the hit composition.