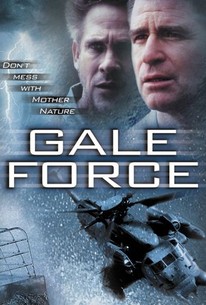 Renegade L.A. detective Sam (Treat Williams) takes a role as a cast member in a reality TV show where he leads a quartet trying to find ten million dollars in buried cash. But Jared (Michael Dudikoff) secretly lands his violent militia on the island in an effort to slay the cast and steal the money. And Jared is successful: Thanks to a corrupt producer, the renegade mercenaries find the cache of cash and start off with it, but Sam and his intrepid, unarmed teammates interrupt them before they can depart. An explosion-filled chase across the island winds up with the good guys trapped by the heavily armed bad guys, and it looks like the game is over for the TV show survivors. However, Mother Nature, in the guises of a hurricane and tidal wave, has other ideas.

To those who prefer fictional fare over reality TV, I give you... Gale Force.

There are no featured audience reviews yet. Click the link below to see what others say about Gale Force!