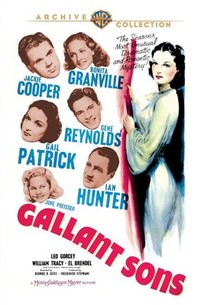 Though its title suggests a war picture of some sort, MGM's Gallant Sons actually concerns the efforts of a group of kids to solve a murder. Young Johnny Davis (Gene Reynolds) is beside himself when his gambler father (Ian Hunter) is arrested for murder. In truth, Davis' pop is shielding several other people, whose reputations might have been ruined during his trial. Sensing that something is amiss, Johnny's pal Byron Newbold (Jackie Cooper) and his ragtag collection of tenement cronies play detective themselves to clear the elder Davis' name and trap the actual killer. Bonita Granville, at the time Jackie Cooper's girl friend, plays the only female member of the crime-solving gang. Coincidentally, Cooper, Granville and costar Gene Reynolds would later go into the production end of the business; in fact, in the early 1970s Reynolds would hire Cooper to direct an Emmy-winning episode of MASH. ~ Hal Erickson, Rovi

Jackie Cooper
as Byron "By" Newbold

George Lessey
as Judge
View All

There are no critic reviews yet for Gallant Sons. Keep checking Rotten Tomatoes for updates!

There are no featured reviews for Gallant Sons at this time.