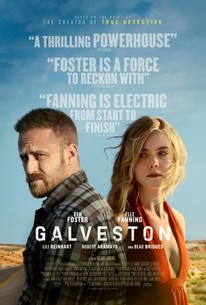 Roy (Ben Foster, Hell or High Water) is a heavy-drinking criminal enforcer and mob hit man whose boss set him up in a double-cross scheme. After killing his would-be assassins before they could kill him, Roy discovers Rocky (Elle Fanning, The Beguiled), a young woman being held captive, and reluctantly takes her with him on his escape. Determined to find safety and sanctuary in Galveston, Roy must find a way to stop his boss from pursuing them while trying to outrun the demons from his and Rocky's pasts.

Don A. King
as Lance

Heidi Lewandowski
as Dee
View All

Foster gives a typically strong performance as the troubled protagonist, while Fanning is excellent as the vulnerable Rocky.

It's uncompromising but at the end, it does leave some room for hope and Foster, in his intense, contained way, makes Roy's redemption highly plausible unexpectedly poignant.

"Galveston" is tough, uncompromising, and hauntingly believable, just a little too slow and a lot too serious for today's typical action audiences.

Bleak and gripping, Galveston offers a compelling experience for those who don't demand pure escapism and are willing to sample the darker side of cinema.

The film equivalent of a familiar, not too special song that's been brilliantly re-arranged and performed.

A muted crime drama that runs out of plot too soon, but makes up for it with powerhouse performances and a finely shaded sense of place.

It doesn't fail, but it doesn't succeed either.

GALVESTON is far more contemplative than one might expect from the plot synopsis, and confident work from Laurent and the lead actors galvanises the light script to multiplicative effect.

[Galveston] starts off like a dramatic thriller but winds up, like its characters, on an unexpected and affecting journey.

Valerie Kalfrin
Their Own League

Galveston is little more than a pulp weepy with delusions of Cormac McCarthy, bolstered by a solid performance and a truly stirring epilogue, but not much else.

Seedy and all too familiar film noir thriller.

Maybe more tried than true, but Galvestone is fine.