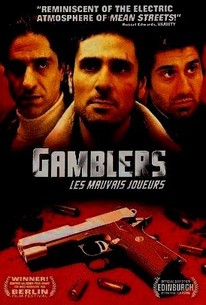 The young French writer-director Frederic Balekdjian makes his feature bow with The Gamblers (Les mauvaises joueurs), a gritty urban crime drama and coming-of-age tale that has borne favorable comparisons to Scorsese's Mean Streets, Robert Mulligan's Bloodbrothers, and James Toback's Fingers. Pascal Elbe portrays Vahe, a con man running scams in the Parisian garment district with his buddies, whose sensitive conscience outstrips his career. After Vahe's girlfriend splits, he befriends her illegal immigrant brother, Yuen - and soon becomes enmeshed in a bitter dispute between the young man and the smugglers demanding extra recompense for slipping Yuen into the country undeterred. Torn in half, Vahe - who teeters on the threshold between compassion and dishonest manipulation, between honoring his friends and honoring his fellow con-men - struggles to determine his values and his loyalties, before all hell breaks loose. Simon Abkarian and Isaac Sharry co-star. ~ Nathan Southern, Rovi

A semi-interesting yet seriously familiar crime drama that'll capably fill 90 bored minutes without actively impressing you in any real way.

There are no featured reviews for Gamblers (Les Mauvais joueurs) at this time.