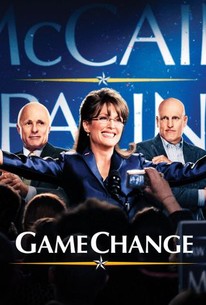 Critics Consensus: Empathetic performances from a starry cast gives Game Change authenticity and heart, although its political insights often warble between feeling too soon and too late.

Critics Consensus: Empathetic performances from a starry cast gives Game Change authenticity and heart, although its political insights often warble between feeling too soon and too late.

Critic Consensus: Empathetic performances from a starry cast gives Game Change authenticity and heart, although its political insights often warble between feeling too soon and too late.

The 2008 U.S. presidential campaign shifts into high gear after Arizona senator John McCain (Ed Harris) picks Alaska governor Sarah Palin (Julianne Moore) to be his running mate in the general election against Barack Obama. Based on the book Game Change: Obama and the Clintons, McCain and Palin, and the Race of a Lifetime by John Heilemann and Mark Halperin. ~ Joe Friedrich, Rovi

Try as the filmmakers might, it just isn't the same. How could it be, really?

The dramatic re-creations are somewhat uneven: The convention staging is quite convincing, the campaign trail less so.

The constant use of actual news footage adds a bit of verisimilitude but also constantly raises the question of why this lightly fictionalized version of the election actually needs to exist.

Game Change, which explores how smart people make dumb decisions, is a movie for all of us.

The movie is more balanced than I expected.

The most egregious fault to be found here is that Roach and Strong succumb to the same indulgences as the news media they're so happy to critique.

There are fascinating levels of fact and fiction in this TV movie - but the script struggles between docudrama relevance and the sense that some of the survivors are pushing their own narratives.

This established group of actors create such a convincing illusion that they make it feel as if the viewer was really in the room when these discussions occurred.

What's truly distressing about the production is that, for all its excellence as a film, it really is all about a game. It is a movie about tactics and strategy, not about governing a country.

A cracking political drama about the true story of the meteoric rise to notoriety by Alaska governor Sarah Palin (played with eerie precision by Julianne Moore).

Is [Game Change] cynical? At worst, yes. If nothing else, it is a sad look inside the current politic process in the United States.

It's a comedy, for at least 30% of its running time, leaving the rest a condensed, perplexing vision of Washington ambition and insistent ego, leaving the movie somewhere between a cartoon and a mean-spirited prank.

This look into the political sphere surrounding the 2008 election is eye opening, very intuitive, and looks and feels like a real depiction of those seen more as celebrities than politicians. Whether or not you find the view slanted, and liberal biases threaded throughout, it was a really microscopic look into the spectrum of political punditry nowadays, how a candidate's look and youth appeal are weighted heavier than their ideology. Palin (Moore) is of course demonized as an ignorant fame whore who finds the work too difficult but the fame heartening. Harris plays John McCain as a hearty, robust American who only wants to calm the nerves of a perverse society and give order once again. He's shown as the good guy, part of the Lost Generation, and Palin is the new, the stupid, the lazy America of youth. It's almost heart breaking to watch Palin get humiliated by the public when she has a certain level of integrity and small town charm. Even if she is demonized, she's depicted as a good person thrust onto the national stage without preparedness, which leaves her looking vulnerable, if overly ambitious.

Julianne Moore scores a personal triumph in this making a woman who is basically an unqualified not terribly bright egoist at least seem human and somewhat used. Quite a feat. The rest of the production is high caliber with exemplary work from Ed Harris, Sarah Paulson and particularly Woody Harrelson. The rest of the supporting cast, Peter MacNicol, Larry Sullivan et. al, is just as strong. It's disquieting though to realize how close an uninformed puppet came to a seat of supreme power.

One of those political dramas that skips the red/blue dichotomy to remind you that politicians are people too. You walk away with a profound respect for Senator McCain, a deep sympathy for Governor Palin, and an overwhelming relief for the outcome of the 2008 election. Overall, a well made movie. Julianne Moore does wonderfully in her attempt to add color to the most colorful character in recent politics, and Woody Harrelson proves again that he is one of the finest actors of the generation. Entertaining and fun, in a History channel sort of way.

During the 2008 Presidential Campaign, John McCain's running mate Sarah Palin was virtual unknown. However she became a fresh face in the campaign. Also she became much ridiculed throughout the campaign and is now infamous due to the Katie Couric interview. Game Change is a well directed and acted political drama with a great cast of actors. Julianne Moore is a great actress and she delivers one of her best performances as Sarah Palin. This is a well constructed film by director Jay Roach, who also directed Meet the Parents and Austin Powers. I thought it was nice to see him tackle something different, and he delivers a well crafted picture that chronicles this historical presidential campaign. Roach directs a stunning cast that includes Ed Harris as John McCain. Woody Harrelson and Ron Livinston also star and they all have something to offer. This is a well rounded out drama, and this is among the best made for TV films that I have seen in quite some time. The plot is terrific, and there's plenty to enjoy despite just a so-so subject. Political Dramas are at times lacking in good content, but director Jay Roach definitely pulls out something special, and he has plenty of good material here to work with. Not to mention that the cast that he directs is wonderful, and are accomplished in terms of delivering effective performances worth seeing. Julianne Moore on the other hand, steals the show and she is absolutely terrific in her part. This is a must see film for people that loves this genre of film and it is worth it alone just to watch a wonderful role played by Moore.