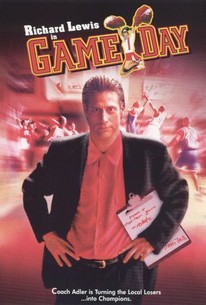 In this comedy, a coach turns a team of losers into winners...but can he do the same thing for himself? Steve Adler (Richard Lewis) was once the head coach of the basketball team for a prestigious Division One university, but after a long and disastrous losing streak, Adler was fired, and after bouncing from school to school, he wound up coaching at a second-rate college thought to have one of the worst sports programs in the country. Against all odds, Adler has found some talent in his rag-tag team, and for the first time ever, the team finds themselves in their division finals. But can Adler put his appetite for drugs and co-eds on hold long enough to make it to the game and lead his team to victory? Game Day also features Frank Gorshin, Sean Squire, and Gerry Becker.

There are no critic reviews yet for Game Day. Keep checking Rotten Tomatoes for updates!

There are no featured reviews for Game Day at this time.