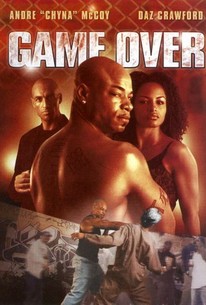 An ex-con and notorious street fighter faces his most deadly adversary to date when he enters a mysterious fight tournament that grows increasingly brutal with each match in filmmaker Peter Sullivan's unforgiving slug-fest starring Matrix heavyweight Andre "Chyna" McCoy. Freed from prison and in desperate search of an income to support his wife and child, street-smart skull-smasher Victor Knox reluctantly agrees to take part in an upcoming underground championship with a winner's fee that's too sweet to resist. As the virtual spectators cheer the fighters on and it becomes increasingly obvious that the beatings won't stop until the last fighter drops, Knox vows to take on the enigmatic creator of the game, known only as The Ref (Daz Crawford), and break free of the deadly tournament before it's too late.

Daz Crawford
as The Ref

Critic Reviews for Game Over

There are no critic reviews yet for Game Over. Keep checking Rotten Tomatoes for updates!

Audience Reviews for Game Over

There are no featured audience reviews yet. Click the link below to see what others say about Game Over!