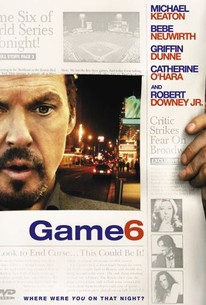 A writer runs an obstacle course of neuroses as he prepares to debut an important new work in this comedy drama. Nicky Rogan (Michael Keaton) is a successful playwright who, after a series of hit comedies, is about to debut a deeply personal drama, and is more than a little nervous about how it will be received. Rogan has learned that notoriously tough critic Steven Schwimmer (Robert Downey Jr.) will be reviewing the opening night performance; a bad notice from Schwimmer sent Nicky's good friend and fellow writer Elliott (Griffin Dunne) into an emotional tailspin from which he's yet to recover. Rogan also has reason to believe that Peter Redmond (Harris Yulin), the play's leading man, may have a serious health problem that could sideline the show. Rogan is being dogged by personal anxieties as well -- his wife, Lillian (Catherine O'Hara), is leaving him, he's having an affair with Joanne (Bebe Neuwirth), who is bankrolling the show, his father (Tom Aldredge) is in failing health, and the life-long Boston Red Sox fan is panicking as his heroes are being trounced by the New York Mets in game six of the World Series. Game Six was the first original screenplay from noted novelist and playwright Don DeLillo; the film premiered at the 2005 Sundance Film Festival. ~ Mark Deming, Rovi

Bobby Steggert
as Son in Play

For fans of DeLillo, Keaton and/or either team in that classic Series, this curious little picture is worth tracking down.

For better and worse, this is a fiction writer's movie: the dialogue is admirably precise, yet the restrictive worldview that's so gripping in DeLillo's books seems like mere solipsism on-screen.

Game 6 is ultimately a curious dud, although it makes us anxiously await DeLillo's next time at bat.

The Red Sox as fatalistic metaphor is almost a quaint notion now, but Game 6 brings it all back to vivid life.

DeLillo and company have let one go through their legs.

It's much more than a curiosity, and if any of this description appeals to you, you know it's a movie, regained, that will hold your attention however much a novelist's voice often drives the flow of the picture. That DeLillo kid? He sure shows promise.

DeLillo, despite the flaws in his first screenplay, shows remarkable promise in writing for the big screen.

Filled with heavy dialogue, Game 6 is a film that feels more appropriate for the stage. That said, it takes on challenging themes and deep thoughts.

The big problem here is one of credibility, on a number of fronts.

A mediocre to average movie with a stellar performance by Keaton and cerebral themes about failure and fears that stay fuzzy instead of coming into sharp focus.

Nicky Rogan: I coulda been happy. I coulda been a Yankees fan.  "It's opening night... Let the games begin." I really wish I would have liked Game 6 more. I like the story. A writer has a new play coming out, that is supposed to be his best work. Everyone is informing him that a tough critic is going to tear his play apart and this begins to worry him. As that is going on it's also the night game 6 of the 1986 World Series is being played(most remembered for Buckner's less than impressive play). Nicky is a Red Sox fan, but doesn't hold out to much hope for the Red Sox winning the World Series.  What seems like a really cool story turns out to not make a great movie. At least in the hands of Michael Hoffman. As much as I wanted to like the movie; nothing in the actual movie was able to allow me to like it. The cast is fine with some pretty big names like Keaton, O'Hara and Downey Jr, but the movie has many flaws and the actors aren't able to make the movie anything special.  All in all Game 6 is a pretty joyless experience. It's also very disappointing because I believe it could have been so much more.

Starts off as a banal "life in the big city" story that takes too long to set the various pieces on their collision courses. When the deeper meanings do rise to the surface in the climax it feels like too little too late since nearly every preceding scene is lacklusterly timed and without urgency. Michael Keaton and Robert Downey manage to eek out performances that are admirable considering the loose script and overall lack of intellectual depth.

packed with heavy hitting weight in front and behind the camera, this quirky new york piece that looks at living with lowered expectations and failure as a way of life somehow just fails to connect by that much...but still is worth a view.

[font=Century Gothic]"Game 6" takes place on October 25, 1986 in a graffiti strewn and gridlocked New York City. Game six of the World Series is set to be played that night between the Boston Red Sox and the New York Mets. Nicky Rogan(Michael Keaton), playwright and Red Sox fan, has a wife who wants a divorce and a grown daughter, Laurel(Ari Graynor), who barely speaks to him. His most personal play is opening that night but the lead actor(Harris Yulin) cannot remember his lines due to a parasite he picked up in Borneo.(Or was it Burma?) Worst of all, Steven Schwimmer(Robert Downey Jr.), the most savage of theatre critics is lurking in the background, waiting to give his opinion on the play.[/font] [font=Century Gothic][/font] [font=Century Gothic]"Game 6" is a literate take on how a person's life can change in a moment. It is fueled by purple prose, especially by of all people, a traffic reporter.[/font] [font=Century Gothic][/font] [font=Century Gothic]Note: I am a Mets fan who was a freshman in October, 1986 at a university in Massachusetts but I was back home in New York for game 6 of the World Series which I barely remember. That was the beginning of one of my favorite hobbies during my college years - antagonizing New England sports fans. [/font]