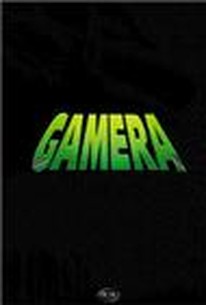 Prehistoric and Intergalactic megamonsters beware! Japan's jet-propelled, flying giant turtle returns, after a 14-year absence in this deliberately retro Japanese sci-fi fantasy, to defeat his giant nemesis Gyaos and to keep the world safe for children everywhere. The trouble begins when a plutonium transport is botched; somehow this disturbs an atoll, causes the disappearance of a professor and an entire village, and reawakens three Gyaos, gigantic flying lizard things with enormous wing-spans who fly about Japan making a lot of noise and causing infinite destruction. The clever scientists observing the birds decide that there is only one structure in Japan big enough to cage the pesky supercreatures: the Fukuoka Dome baseball stadium which has a roof that can open and close. All of the ensuing hullabaloo manages to awaken Gamera, the monster turtle, from his long slumber. He promptly destroys the stadium and releases two of the Gyaos. Disaster ensues as he and the scientists endeavor to stop the avian invaders from destroying the entire world. The film's exciting, climactic battle between Gamera and Gyaos takes place in the smoldering ruins of Tokyo. ~ Sandra Brennan, Rovi

Critic Reviews for Gamera: Guardian of the Universe

Precisely the kind of movie that I enjoy, despite all rational reasoning.

Equal[s] the best of the 1990s Godzilla films while breaking further from genre convention.

Audience Reviews for Gamera: Guardian of the Universe

After a 14 year absence, Gamera makes his legendary return under the masterful hands of Director Shusuke Kaneko. This film throws away the franchises kids-movie tendencies by having a serious tone and a story to engage mature audiences. The plot is a reboot, ignoring all the film's that came previously. The human characters are very well-developed and defined. The pacing does not miss a beat and you'll find yourself actually emotionally resonated at times. The Gamera suit is given a great update, Gamera does not look as abnormally thin as in the Showa-era films. Forget the gentle protector in the previous films, the Gamera here takes a turn for the badass in this flick. Gamera's nemesis, Gyaos, is also given an update that far surpasses its previous incarnation. Gyaos actually comes across as scary and vicious in this film. The visuals are incredible, the model cities are exquisite and the digital effects are especially well-done. The action is explosive and we actually see the monster's destruction effecting the people. Overall, a great monster flick that demonstrates the greatest aspects of the genre, but the best was yet to come.

Despite seeing the stock-footage filmed Super Monster I still decided to continue with the series. To my surprise I actually liked this entry in the series and is a major improvements over previous installments. Gamera: Guardian of the Universe is about a hibernating species of giant carnivorous bird that are awakened on a Japanese island shortly after the Japanese military encounters an unidentified mass moving beneath the water off-shore. To the movie credit they actually made the human characters rounded and interesting to follow. Aside from awaking Gamera and finding the Gaos, the humans are pretty much useless as Gamera always have to come in to save the day. There's also the fact that even though our main characters stated that Gamera didn't kill any people on a island people are getting killed by other monsters, the military still goes after him. The acting on the other hand is uneven, there's a noticeable difference in the level of acting. The dialogue can be ridiculous at times, but this a monster movie we're talking about and they tend to have laughable dialogue. Another positive about the production is that they actually improve over the original design. The left side of the image are the previous designs and the right side are the improve design. [IMG]https://sphotos-b.xx.fbcdn.net/hphotos-ash4/292464_401897579866910_93858524_n.jpg[/IMG] Gamera (top right) still needs a little work as he doesn't look quite as menacing as his Japanese rival Godzilla. The Gaos (bottom right) are more detailed in their design and at times they look convincing. I find it a little strange that despite the advancement of CGI the filmmakers only use it when necessary, but in our time when movies are constantly resorting to CGI it's great to see actual effort in making these monsters and model cities. For the first time in the long running series they balance the perfect of amount monster action with human talking about the issue. The cinematography is what really made this movie work, they were able to capture these monsters in way where is doesn't look too fake. The action is capture is pretty well and there's some great shots in the movie. The filmmakers put allot effort with the payoff being a good monster flick. Gamera: Guardian of the Universe is good monster flick and one of the better Gamera film in the series. He might not be as well know as Godzilla, but Gamera definitely deserve your attention with this entry.

It is quite a shame that, over here in the states, few people have heard about Gamera. Who is Gamera you ask? Why, he is just the turtle version Godzilla. Basically what you are missing out is on a giant turtle that breaths fire and has huge tusks attached to his lower jaw. This monster is one of a very sad, and rather depressing history. Started off as a last ditch effort for Diae Studio in Japan, Gamera was meant to be the box office rival of Godzilla, who has, by that time, had four films out and was around for about ten years. When Gamera was released, it tried to create the dark overtones that Gojira (the original Godzilla film) had, but ultimately failed. All other films would be complete embarrassments. They were aimed towards kids, the suits were trash, it was insulting. Even more when in 1980 Space Monster Gamera was created, and there is no words to describe that horror. So for fifteen years, Gamera laid in obscurity. Until one man decided to reboot him and in the process, created one of the finest giant monster trilogies of all time. Shusuke Kaneko is the ultimate modern director for giant monsters. He understands the creatures, how to film them, how to make them look impressive, while also telling a rather dark tale of giant birds that feast on humans. Being his first giant monster film, he does show rather strong promise with the way this film is told. My only true complaint about his directing is that, for this film, he plays it safe. I know that this was his first one, but I wish that this film could have been more out there and not kept locked up so much. What I mean by that is: I would of like more scenes of the Gyaos (the giant birds) attacking humans and more scene of the humans talking and us just getting to know them a bit more. I understand that this a giant monster film and we are delivered by cheasy dialogue and shown that all of the money is to go to the monsters, but while this film is better then the average monster flick, I wish that it would be a built more intelligent. But where it lacks with dialogue and development, it makes up for in spectacle. The set designs and the looks of the monsters are all impressive, even more better than Toho studios, and they usually have the best in terms of making costumes and building sets for these types of films. Compared to today, the effects look very amateurish. But, that is the beauty of it all: it is fun to watch. This is the type of film which you are constantly aware of the strings and effects, but in the end of it all, you just end up loving it because it is cheap. Plus, the suits in terms of detail, is in a complete class by themselves. As the trilogy of Gamera continues, the suits get more elaborated in terms of detail. But, the ones here are so basic in terms of design, that it is just a pleasure to sit back and watch. Now, for the acting of the humans, this was a bit of a shock because of how rounded these characters are. But, for this film, the character that stood out the most to me was Ayoko Fujitani (who is the daughter of Steven Seagal). The main reason why is because, once people would become aware of who she was, she would be compared to her father. But, as an actress with her first major role, she handles herself pretty well. The rest of the cast, including those that will make reoccurring appearance through out the entire trilogy, do make a good attempt at standing their positions as characters of this film saga. Though, the acting does get laughable at times with the dialogue being a little bit comedic, but that is part of why I love this film: it does not take itself completely seriously. The other two films will. But this film does not. That is my main point of this film: it is fun and should not be taken seriously. The film is laughable, has some rather good entertainment scenes, and plenty of giant turtle action. If you go in with an open mind, and willing to throw away common sense, then you are in for a treat.

Gamera: Guardian of the Universe Quotes