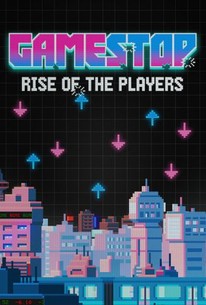 In January 2021, the brick-and-mortar video game retailer GameStop had been the top story on every news network in the country. Its stock had risen over 2500% amidst a wild flurry of volatility, despite no new news coming out of the company. The run was fueled by an epic "short squeeze" on a handful of billion-dollar hedge fund behemoths, netting online investors millions and costing the hedge funds tens-of-billions of dollars in the process. But this wasn't just a run on a stock. This was a battle that has been brewing for years. It's a David and Goliath story of a band of contrarians who bucked conventional wisdom to bet on themselves, their own research, and a business that Wall Street had given up on.

Critic Reviews for GameStop: Rise of the Players

A serviceable and lively documentary...

Mainly, what helps "Rise of the Players" overcome its stylistic and journalistic weaknesses is that Tulis and company understand why those early GameStop adopters are so easy to root for.

It doesn't take a financial genius to recognize "GameStop: Rise of the Players" is a winner. Diamond hands all the way.

Tulis and producer Blake J. Harris have finally reshaped the story in a way that gives us folks worth cheering for. GameStop: Rise of the Players is like one of those sports movies that's great because it isn't about sports.

The film is unapologetically centered on a gamer/internet indoctrinated audience and, as a proud member of that audience, I had a lot of fun watching it.

By keeping most of the focus on the heroes of the saga, "GameStop: Rise of the Players" becomes easy to embrace, acting as a wake-up call for those who are just dabbling in the stock market and those eager to find the next major meme stock.

Nate Adams
The Only Critic

GameStop: Rise of the Players provides most of [the] information in quick, succinct doses. It's not much of a help.

For the rest of us uninitiated on the world of stock trading, Gamestop: Rise of the Players is a rapid-fire headache...a film that confuses more than it clarifies...

There are no featured reviews for GameStop: Rise of the Players at this time.

GameStop: Rise of the Players Quotes