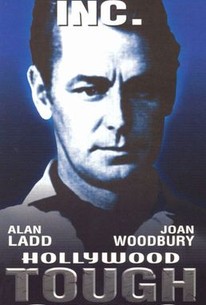 Paper Bullets (aka Crime Inc.) was the first production by former slot-machine entrepreneurs Maurice and Frank Kozinski, later and better known as the King Brothers. Written by former crime reporter Martin Mooney, the story focuses on the efforts by an undercover agent Bob Elliot (John Archer) to get the goods on mobster Mickey Roma (Jack LaRue). The key to Elliot's investigation is gorgeous ex-convict Rita Adams (Joan Woodbury), who hopes to get even with Harold Dewitt (Philip Trent), the cad responsible for her incarceration. Rita's plan is to inveigle herself into the graft operation run by Harold's "respectable" politician father Clarence Dewitt (George Pembroke), then to obtain valuable evidence against Dewitt and his partner-in-crime Roma. Billed sixth as reporter Jimmy Kelly is young up-and-comer Alan Ladd, who managed to land a part in Paper Bullets because he and costar Philip Trent shared the same agent, Sue Carol (later Mrs. Ladd). When the film was reissued in 1943 as Gangs Inc, Ladd was awarded star billing.

There are no critic reviews yet for Gangs Inc.. Keep checking Rotten Tomatoes for updates!

There are no featured reviews for Gangs Inc. at this time.