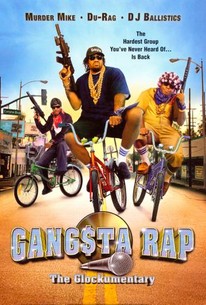 My Baby's Daddy co-screenwriter Damon "Coke" Daniels goes back to his hip-hop roots with this mockumentary detailing the fall and subsequent comeback attempt of fictional West Coast rap trio "Gangsta Rap." Murder Mike, Du Rag, and DJ Ballistics like to keep it old school. A shady threesome whose musical career has taken a back seat to constant run-ins with the law and multiple child custody cases in recent years, the self-proclaimed "godfathers of gangsta rap" scheme to save their fast slide into irrelevance by staging a triumphant return to the microphone. After bursting onto the scene with such tracks as "In My House Shoes" and "My Momma's a Bitch" in the mid-1980s, Gangsta Rap remained a sizable fixture on the West Coast rap scene for nearly a decade. Now, after years of setbacks and self-destructive in-fighting, Gangsta Rap is finally prepared to show the new school just what the original gangstas have to offer. With special appearances by Too Short, Howie Bell, Clifton Powell, Leslie, and Gerald Johnson, Gangsta Rap: A Glockumentary offers a seamless blend of hip-hop humor and street smart satire.

There are no critic reviews yet for Gangsta Rap: The Glockumentary. Keep checking Rotten Tomatoes for updates!

There are no featured reviews for Gangsta Rap: The Glockumentary at this time.