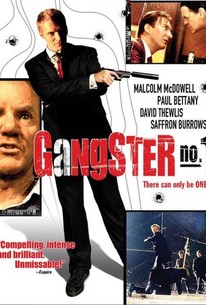 Critics Consensus: Gangster No. 1 is brutally violent, yet also compelling.

Critics Consensus: Gangster No. 1 is brutally violent, yet also compelling.

Critic Consensus: Gangster No. 1 is brutally violent, yet also compelling.

In London's Soho section in the 1960's, a leading gangster boss teaches his ambitious young apprentice the secrets of his trade.

Alex McSweeney
as Bloke in Tailor's

Jack Pierce
as Jack the Lad

Danny Webster
as Youth
View All

Critic Reviews for Gangster No. 1

Director Paul McGuigan and cast infuse the proceedings with a strong dose of psychotic gusto and visual flare.

Doesn't offer much besides glib soullessness, raunchy language and a series of brutal set pieces ... that raise the bar on stylized screen violence.

The film has a kind of hard, cold effect.

Gangster No. 1 is solid, satisfying fare for adults.

Despite some really good performances especially from Bettany, this is a pretty terrible movie...

A stylish, confused and insanely violent gangster drama from a first-time Brit director.

...cool shots do not a riveting film make.

. . .captures the kinetic quality of the 60s with jump-action pacing, groovy camera angles and the occasional split screen treatment that never crosses the line into camp.

It certainly feels unique, and sets itself apart from most American gangster films in its stark refusal to paint the lead gangster as likable or indeed anything other than the vicious socio-psychopath he is.

McGuigan has assembled a stellar all-British cast in which there are no weak links.

Audience Reviews for Gangster No. 1

Gangster 55: I'm Superman! King fucking Kong! I can pick you up and throw you a million miles. I'm number one.  "It's not who you know, it's who you kill." I'll admit it did take me awhile to warm up to Gangster No. 1, but it did turn out to be a really good English Gangster film. What won me over were the performances by Paul Bettany, Malcolm McDowell and David Thewlis. Each of those actors gave an outstanding performance. The movie chronicles the rise and fall of Gangster No. 55, played by Paul Bettany when he's young and Malcolm McDowell when he's old. Both actors really sell the character and make the Gangster a very interesting character. I always enjoy watching Malcolm McDowell and he gives a sinister performance. He also does an extremely good voice over throughout the entire movie. Bettany is equally sinister and really makes the movie. Gangster No. 1 or as I prefer, The Gangster with No Name, does have it's flaws though. Many times the film comes of as an exercise in style of substance. It uses a lot of different editing techniques that I don't think helps the movie at all. If anything, I believe it hurts it. Like I said it did take me awhile to get into the movie. It didn't really become captivating until half way through, but from there on out it really is a great movie. Honestly I almost turned it off a few times in the firs 45 minutes, but I'm really glad a gave it a shot. It's not going to be a gangster classic by any means. It borrows from a lot of previous films, but in the end it does separate it's self from all of them. It's a cool, stylistic and well-acted movie.

I liked it for the extraordinary talents of Paul Bettany, who turned in one outstanding performance, as usual. It's an otherwise muddled mess the latter fourth of the film, however, when 25 years later an aged Bettany morphed into into Malcolm McDowell?? The logic ot that totally messed up the film for me. But, all in all, Bettany makes it worth the watch...because, let's face it...he is the bomb! :)

"There can only be ONE." Chronicles the rise and fall of a prominent, and particularly ruthless English gangster.

REVIEW
What a mug! The evil-harlequin mask of Malcolm McDowell, so familiar from those bugeyed closeups of him "mounching lumpchiks of toast" in A Clockwork Orange, has aged into a fabulous ruin. And one of the pleasures of the glib, slick, cocky, brutal, shallow, and terrifically entertaining Gangster No. 1 is in the realization that McDowell is the same McDowell--his voiceover has the same energetic sneer it had 31 years ago in Clockwork. He's the same guy under a withered and weathered facade. As Gangster No. 1--a sociopath with a schoolgirl crush on his boss, spit-shined David Thewlis--McDowell brings you into the succulent pleasures of aged corruption and long-swallowed brutality. No. 1's nuttiness--a kind of belch of guilt, generally released in Francis Bacon-derivative silent screams--seems, for a while, like fun. Paul Bettany, playing Young No. 1, has a great, lizardlike, histrionic deadpan--he keeps telling his victims "Look into my eyes!" as if something scary and deep were hidden there. (Instead, there is zero--an effect Young No. 1 may be unaware of.) The movie takes such a jaunty and directorially piquant view of its own shin-kicking nihilism that you can't help but play along; until the moralizing but utterly earned finale sets you on your ear. Not deep stuff--not even as deep as the superbly unself-reflective head-smackers who made up Goodfellas' crew. But Saffron Burrows, as a Cockney chanteuse who's mad in love with Thewlis' Mr. Big, brings you back to the days of much-posher-and-prettier-than-their-parts British character actresses. And the director, Paul McGuigan, and Bettany keep the joint jumpin'.