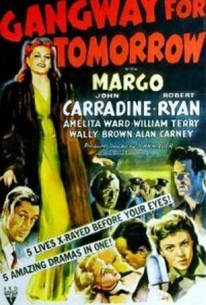 In this drama, set at a WW II munitions plant, the lives of five workers are chronicled. Their stories are told via flashback. Though they all ride together to work everyday, and they think they know each other very well, the stories they tell show them otherwise. The group of workers is made up of: a fighter for the French underground who came to America to help her countrymen back home; a race-car driver who, while racing, sustained serious injuries that rendered him unfit for military service; a disillusioned "Miss America"; a prison warden who was ordered to execute his own brother; and a hobo who decided to do something to help his country.

Critic Reviews for Gangway for Tomorrow

Garners great interest from its beginnings. [Full review in Spanish]

There are no featured reviews for Gangway for Tomorrow at this time.