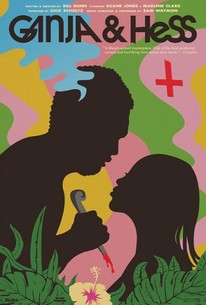 What could have been a mere blaxploitation picture is elevated above the norm by two factors. The first is the performance of Duane Jones, cast as a professor of African studies who moonlights (literally as a vampire). The second is the mood-drenched, jazzy musical score, which very likely cost more than the film itself. But back to the plot: Jones continues to carry a torch for his ex-wife Marlene Clark-who, before the film is over, goes "bats" herself. Featured in the cast is writer/director Bill Gunn as the villain (no, the vampire isn't always the heavy) and the always welcome Mabel King.

Mabel King
as Queen of Myrthia

Candece Tarpley
as Girl in bar

Tara Fields
as Woman with Baby
View All

A seminal take on Blaxploitation and horror.

Surreal, collage-like '70s vampire film, wrapped in the embrace of black Christianity and fighting it. You'll know if this film is for you very quickly...

The film making is far from flawless, but what Ganja & Hess really projects is the sense that it came from a person who wanted the work to reflect himself. It is a personal film, its creator having put his art and intellect on the line.

Whether by accident or design, [Gunn's} creating a new kind of artistic expression out of imagery that had been used to titillate and exploit, a sort of pushback against the producers who wanted him to make a "black vampire movie."

...an experimental overlapping of dialogue, image, voiceover and music that makes you feel as if you're suffering from an awful fever dream.

(In Ganja and Hess) we get a devastating art film that raises more intriguing philosophical questions than hairs on the back of one's neck.

A meandering but stylish jumble.

There are no featured audience reviews yet. Click the link below to see what others say about Ganja & Hess!