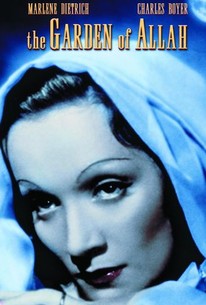 The Garden of Allah Photos

Marlene Dietrich stars as the noble Domini Enfilden in this third film version of Robert Hichens' 1904 novel. After caring for her dying father, Domini is told by her Mother Superior (Lucille Watson) that she should go to the Algerian desert to rest and seek sanctuary. On her way to the town of Beni-Mora, Domini meets the ill-tempered and mysterious Boris Androvsky (Charles Boyer), a Trappist monk who has forsaken his vows and also seeks the Algerian desert for salvation. Domini is attracted to this moody monk, but continues on. Her desert guide, Batouch (Joseph Schildkraut), takes Domini to a cabaret, where a riot breaks out during a production number. Boris re-appears to rescue her from the trashed club. Domini and Boris fall in love, marry, and travel to the desert for their honeymoon. There the newlyweds encounter a unit of the French Foreign Legion, whose commander, De Trevignac (Alan Marshal), holds a secret to Boris's past.

Helen Jerome Eddy
as A Nun

Charles Waldron
as The Abbe

Nigel De Brulier
as The Lector

Corky the Dog
as Bous-Bous

Bonita Granville
as Children in Convent

Ann Gillis
as Children in Convent

Critic Reviews for The Garden of Allah

Lacks a fresh point of view and its people lack individuality.

While Dietrich had heretofore starred as boundary pushing vixen for Von Sternberg, this attempt to buttonhole her wiles simply doesn't work.

It has moments of lavish beauty, both the African scenery and Miss Dietrich lending themselves to the technicolor process with high pictorial effect.

Starring Dietrich and Charles Boyer, this disappointing third version of the popular 1904 novel, is mostly known for its use of three-color Technicolor, which won an Oscar.

More a collection of character vignettes than a full-blown story, Garden Party nonetheless shows as much promise for its makers as it gives to its characters.

Nothing new in writer-director Jason Freeland's Garden Party, then, nor anything particularly insightful about the mercenary business of getting by and ahead out here.

It's familiar stuff if you've sampled the vast body of work devoted to LA-dammerung.

The stars talk gibberish in this romantic melodrama as if they have sand in their mouth.

Audience Reviews for The Garden of Allah

The Garden of Allah Quotes