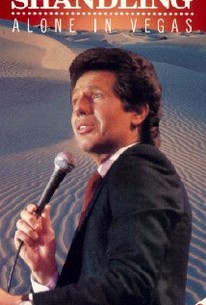 Less formally known as Garry Shandling Alone in Vegas, this 60-minute video is 100% Shandling, which is either good or bad news depending upon who's watching. Shandling's "average guy stuck in the farce called life" persona works quite well within the framework of the tape. Casual fans, however, might prefer the Johnny Carson-baiting Shandling of the much-later cable series It's Garry Shandling's Show and The Larry Sanders Show. Like those two projects, Alone in Las Vegas began as a Showtime cable special--Shandling's first, in fact. This 1984 effort was directed by William Dear, who also helmed Mike Nesmith's Elephant Parts, which begat the series Television Parts--which in turn begat the It's Garry Shandling's Show comedy sketch that put Shandling on the map.

There are no critic reviews yet for Garry Shandling: Alone in Vegas. Keep checking Rotten Tomatoes for updates!

There are no featured reviews for Garry Shandling: Alone in Vegas at this time.