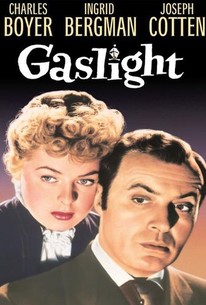 George Cukor's remake of the 1940 film Gaslight is the story of a beautiful, innocent woman (Ingrid Bergman) who marries a charming man (Charles Boyer) who tries to drive her insane. Boasting a lavish, detailed production that perfectly recreates the Victorian era, Gaslight is one of the greatest psychological thrillers ever made, thanks to Bergman's stellar, Oscar-winning performance. Gaslight was later shown in a computer-colorized print.

Dame May Whitty
as Miss Thwaites

Alix Terry
as Girl of Ten

Oliver Simon
as Boy in Museum

There's more enjoyment to be gained from seeing the picture with little advance preparation.

It's a superbly creepy thriller, with universal themes...An essential movie in anyone's canon.

Direction by George Cukor is ever a display of fine craftsmanship. He utilizes small mosaics of sharp characterization in building to his climax and works in each facet faultlessly. This is the job for which Cukor admirers have been waiting.

This 1944 film is one of the few psychological thrillers that is genuinely psychological, depending on subtle clues -- a gesture, an intonation -- to thought and character.

Paula's sense of helplessness is key, as she's isolated or alienated from friends and family - and from anyone who can help her to overcome her oppression.

We doubt that any artist can beat Ingrid Bergman as a candidate for this year's Academy Award. [Full review in Spanish]

Gaslight serves as a fascinating depiction of psychological torture. What strikes me about it the most is the way patriarchy and male dominance play out in the narrative.

We rely on the actors and the script to convey the mood, and director George Cukor matched no less a figure than Alfred Hitchcock with the results.

It's a bit dated now, but still has much to offer, notably George Cukor's intelligent direction.

Bergman won an Oscar for her role but it was Boyer who should have won many for his meticulous performance as the mysterious husband (he was nominated, though) in this taut thriller whose tension is increased by an exemplary art direction and mise-en-scène.

Remakes are often (and righteously) seen as the blight of the film industry but that is not the case here in this elegant reworking of a lean and muscular Brit classic. Hollywood's magic is in hard evidence with better writing, camera work, lighting and sound than the original. And then there is the cast. A woman in a fashionable London townhouse, seemingly alone, cut off, in doubt of her own sanity, wonders if she's ruined what once seemed a happy marriage. Bergman won an Oscar, but everyone brings home the bacon here.

A very Hitchcockian thriller, if not close to the quality of the best movies by Hitchcock or his imitators. The plot (involving a woman who slowly seems to be losing her grip on reality...or is she?) probably was much more effective in 1944, now this kind of thing has been done so many times that it seems painfully transparent from the very beginning. Gaslight isn't a bad movie, but it lacks the timeless quality that makes so many classics as good today (or even better) than they were when they were made. Kudos to Ingrid Bergman, though, who is mesmerizing in the last half of the movie. She's truly one of the greatest actresses of all time.

Similar to other suspense movies of the forties, but still a pretty powerful story. I really like this movie.