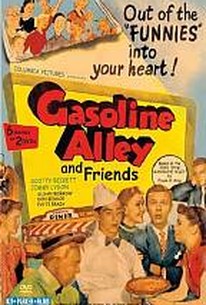 Gasoline Alley was based on Frank King's popular comic strip of the same name. The strip's central characters, service station owner Walt Wallet (Don Beddoe) and his adopted son Skeezix (James Lydon), take a back seat to newlyweds Corky (Scotty Beckett) and Hope (Susan Morrow). Hoping to establish his independence from his family, Corky opens up his own restaurant, which results in nothing but headaches. The film tries as best it can within 76 minutes to recreate the 30-year continuity of the original comic strip. Director Edward Bernds, a graduate of Columbia's short-subject department, relies upon a couple of his 2-reeler colleagues, Dick Wessel and Gus Schilling, to provide a soupcon of slapstick. Because of legal entanglements, neither Gasoline Alley nor its sequel Corky of Gasoline Alley are available for TV showings.

Charles Williams
as Mortie
View All

There are no critic reviews yet for Gasoline Alley. Keep checking Rotten Tomatoes for updates!

There are no featured reviews for Gasoline Alley at this time.