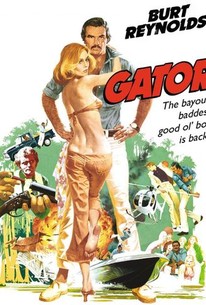 Having created the character of Gator McKlusky in 1973's White Lightning, Burt Reynolds reprises the role in the appropriately titled Gator. Once again, ex-convict McKluskey is strong-armed into helping the feds nab a dangerous criminal, who turns out to be an old high-school chum (Jerry Reed). He is aided and abetted by TV reporter Aggie Maybank (Lauren Hutton) and comedy-relief FBI agent Irving Greenfield (Jack Weston). Talk-show host Mike Douglas makes his film debut as a Jimmy Carter-style governor. ~ Hal Erickson, Rovi

Bob Yeager
as Man In Hospital

Structurally, Gator is a bit of a mess, largely because of the civilizing and romantic influence Reynolds has brought to the randy domain of the redneck action film.

It never quite connects, even though a summary of its key scenes is like a laundry list of action-'n'-romance cliches.

Good-ol'-boy humor is my least favorite form of masculine love-antagonism in the cinema, but even a generous-minded peckerwood ought to weary rapidly of the snorting, yokking, hooting interplay...

the film's pace is deadly slow and aimless

"Even though it's the sequel, I think it's actually the stronger of the two films."

I haven't even seen the original "White Lighting" and I don't think I'll bother now. There were no redeeming qualities in this film. A few great boat jumping stunts, using visible stunt doubles, was not enough.

Three years after the hixploitation moonshining classic "White Lightning", Burt Reynolds's again portrayed Gator McKlusky in "Gator", but this time he was behind the camera as well in his directorial debut. Anyway, this time around Gator has just been released from federal prison for moonshining when he is asked to help the police nab a crooked politician. Although not as good as "White Lightning", "Gator" is still a fun little film none the less. First off, Reynolds's is excellent in his role, he give a cool and calm performance that makes Gator a pretty easy hero to root for while watching this film. In addition the car chases are pretty sweet and exiting. I also thought Jerry Reed gave a excellent and slimy performance as the crooked Bama McCall. Now, as I said before "Gator" is not as good as "White Lightning" and certainly has its flaws. For one thing, the run time of just under two hours was a bit much and therefore the movie drags here and there, especially towards the end. Secondly and this is a big problem for me, the DVD is in full screen until for some odd reason it switches to wide screen format for the closing credits. That's a real shame because this movie was made to be shown in widescreen as the closing credits demonstrate. Despite those flaws though, "Gator" is still none the less an enjoyable film if not essential viewing.