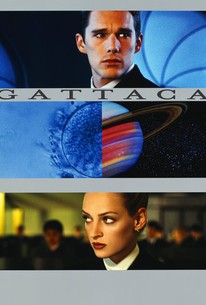 In a futuristic society where commerce has overridden more humanistic concerns, the rich and successful, eager to obtain physical and mental perfection, have taken to genetically engineering their off-spring. Such lab-created babies are known as Valids, while those conceived in the normal, loving fashion are In-Valids and are considered second-class citizens at best -- especially if they have birth defects. Vincent (Ethan Hawke) is an In-Valid while his brother Anton (Loren Dean) is a Valid. The former brother is short, sickly, and bespectacled, while the latter brother is handsome, healthy and born to succeed. But though Anton seems close to perfection, he lacks the emotional flaws, passion, determination, desire and faith that motivate Vincent, whose strongest desire is to become a space navigator for the Gattaca Aerospace Corporation and travel on an upcoming mission to the moons of Saturn. Unfortunately, his birth status and a heart defect, relegate him to menial jobs. Unwilling to abandon hope, Vincent determinedly visits DNA broker German (Tony Shalhoub) who is able to create false identities for similar In-Valids. It is not an easy transformation but eventually Vincent -- who thanks to the genetic contributions of paralyzed Valid Jerome Morrow (Jude Law), becomes Jerome while the wheel-chair bound donor becomes Eugene -- finally enters Gattaca for training. There he encounters a beautiful Valid pilot, Irene (Uma Thurman) whose defective heart prevents her from flying. Irene's plight is a fate she passively accepts whereas Vincent is willing to oppose and fight for what he wants. Meanwhile, an increasingly complex relationship evolves between Vincent/Jerome and Jerome/Eugene. Set in an oppressive, bureaucratic and chillingly plausible early-21st-century world, Andrew Niccol's sci-fi thriller differs from others in its focus on a morally ambiguous world and on characters rather than gizmos, technobabble and special effects.

Dean Norris
as Cop On The Beat

An institutional hush envelops the compelling cautionary fable Gattaca as if it were muffled by a velvet lab coat.

A thoughtful hybrid of sci-fi, thriller, and character drama; to give you some idea of its high-mindedness, it not only opens with a relevant Bible verse (Ecclesiastes 7:13), but in the opening credits that follow, Gore Vidal is fifth-billed.

I didn't care enough about Hawke's character to ignore a big problem in the story's logic: if this future has such incredible biotechnology, why can't Law just get his damaged body parts fixed?

One of first Hollywood films about the effects of genetic engineering on human conduct, Andrew Niccol's directing debut is an intelligent and timely sci-fi that, despite some illogical plot contrivances, is emotionally engaging almost up to the end.

Chilly, elegant, and a little bloodless.

Gattaca relies on solid storytelling rather than lazily hoping to distract you with great visuals and special effects.

The fixating premise and the commentary on conviction defeating arbitrary inequities make for an unconventional and wholly entertaining experience.

A clever and sly slab of sci-fi, depicting a future where the superior race will be people genetically assembled from the edited highlights of their parents.

Gattaca doesn't quite live up to the promise of its premise.

An intelligent, rather grounded and realistic look into a near future when parents can choose the genetic makeup of their kids, and the story of a man fooling the system of only the perfect candidates making their way in life and career. Good acting, interesting characters, a cool, very subtle set design and exciting plot make this utopian/dystopian thriller a gem of the genre. The thriller elements are subtle at first but make for a few really exciting sequences towards the end. The wonderful soundtrack completes the picture, always striking the right chords. Especially the ending is very strong and comes up with one of the most beautiful last lines ever.

Little known film with big actors and an intriguing story-line.

An amzing sci fi classic. Hawke and Thurman shine. The whole idea of gene manipulation in the future is such a scary storyline.