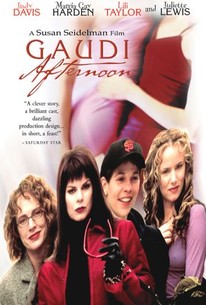 An American abroad finds herself falling in with an eccentric group of fellow expatriates in Spain in this comedy. Cassandra (Judy Davis) is a nomadic American who finds herself stranded in Spain, where she's found temporary work translating books into English. However, Cassandra's limited translating skills are not bringing home the bacon, so when she encounters a strange woman named Frankie (Marcia Gay Harden), she's willing to help her find a missing friend for a price. Cassandra soon discovers Frankie isn't a strange woman after all -- she's a man living as a woman in preparation for a future sex change operation. It seems Frankie's significant other, a seriously butch lesbian named Ben (Lili Taylor), has walked out on her and taken their daughter Delilah (Courtney Jines) with her; Frankie wants Cassandra to help her find the two of them. As it turns out, Ben has moved on to new pastures, becoming involved with April (Juliette Lewis), a head-in-the-clouds bohemian, and with the help of wealthy art patron and part-time magician Hamilton Kincaid (Christopher Bowen), Ben, April, and Delilah are happily squatting in a spare wing at La Pedrera, Spain's best-known gallery. As Cassandra tries to persuade Ben to reconcile with Frankie, she gets fast-talked by Hamilton into performing as part of his magic act. Gaudi Afternoon was directed by Susan Seidelman; it was her first dramatic theatrical feature since Cookie in 1989, after spending over a decade making documentaries and television projects.

Victor Alvaro
as Juan
View All

A kooky, madcap adventure set in Barcelona devolves into a sort of sub -sub-Almodovar picture. Stay for the opening credits, then leave.

For a while, the sheer exoticism of the characters and the setting provides a certain amount of interest, but the film's farcical situations, mostly involving the sexual orientation of its characters, ultimately prove tiresome.

A mildly entertaining gender-bender comedy set in Barcelona, never quite lives up to its excellent cast or the onetime promise of director Susan Seidelman.

What should be a soufflé of gender-bending mischief is more like a bowl of oatmeal.

The trumped-up alley-to-plaza intrigue could use more smoke and less mirrors.

An emotionally and intellectually subtle work.

With a lovably quirky script, lovely production values and delightful performances by a strong cast, Gaudi Afternoon is Seidelman's best film yet.

The offbeat cast and gorgeous Barcelona locations can't quite make up for the thinness of the mystery and forced quirkiness of the characters and their tangled relationships.

A waste of talent.

Although the ending briefly dips into some silly sentimentality, the film as a whole is liberated by Cassandra's sardonic charm and a madcap exploration of the mother-daughter nexus.

There are no featured audience reviews yet. Click the link below to see what others say about Gaudi Afternoon!