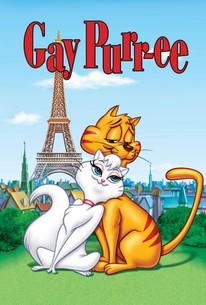 In this animated film, an ambitious farm cat named Mewsette travels to Paris in search of fame and excitement. Followed by her friends, the country kitties run across a group of bad cats and have many adventures. Songs by Harold Arlen and E. Y. Harburg.

It's so brightly colored that the simple act of looking at it remains pleasurable even when the story vanishes into an insubstantial puff of smoke.

Mediocre songs, so-so animation...but it has Garland and Goulet singing.

This movie is pretty good, but Aristocats is much better, I recommend that movie over this one. Of course if you like Garland, I'd say see this movie anyway. It's sort of fun.