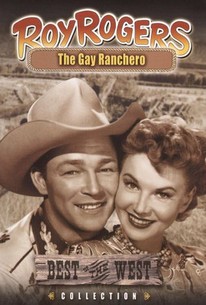 One of the better Roy Rogers films of its period, The Gay Ranchero also happens to be one of the more violent Rogers efforts. The villains want to gain control of a private airport, and aren't above sabotage and murder to get what they want. Riding to the rescue is sheriff Rogers, who is aided by Latino-flyboy Nicci Lopez (Tito Guizar). Roy gets to warble several tunes both by himself and with heroine Jane Frazee, while Tito Guizar solos on "You Belong to My Heart" and "Granada." One of the writers of the title song was Abe Tuvim, the father of actress Judy Holliday. ~ Hal Erickson, Rovi

Bob Nolan
as Bob (Leader, Sons of the Pioneers)

There are no critic reviews yet for Gay Ranchero. Keep checking Rotten Tomatoes for updates!

There are no featured audience reviews yet. Click the link below to see what others say about Gay Ranchero!