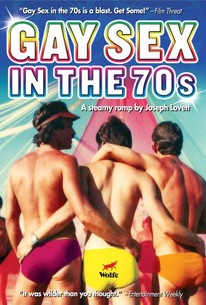 Gay Sex in the 70s Photos

In 1969, the Stonewall riots in New York City sounded the opening bell of the Gay Pride movement in America, and for many gay men it offered an opportunity to come out of the closet and live their lives in the open for the first time. As the gay community sought to define itself, it's not surprising that sex, once furtive and approached with no small amount of fear and shame, suddenly became openly and publicly celebrated and sought after, and in a handful of American cities, the gay scene became the center of a wildly celebratory orgy that lasted until 1981, when the discovery of AIDS led many men to reexamine their sexual habits. Filmmaker Joseph Lovett, himself a gay activist who produced one of the first major investigative stories on AIDS to be broadcast on American television, interviewed a number of men who survived the '70s for his documentary Gay Sex in the '70s, which offers a sometimes witty and sometimes rueful look back at the discos, bathhouses, underground clubs, and gay-friendly resorts which dominated the social and sexual scene of the day, as well as the stories of the men who sought to declare their new identities through sex.

Critic Reviews for Gay Sex in the 70s

Gay Sex in the '70s is technically erratic and far from definitive. Full of fascinating stories and fleshed out with evocative archival footage, it's also a loving portrait of a semi-forgotten New York.

New York in the 1970s seems like an arena of nonstop gratification, but one that can only be understood in the context of the repression and fear that had gone before. It seems as distant as the 1890s.

... lacks the authority of such gay documentary classics as "Word Is Out" and "Before Stonewall," which were far more inclusive.

There is, however, little socio-political insight into the Dionysian revolution depicted here; the film seems to serve more as a nostalgia piece than anything.

An engrossing piece of social history, a lively, astonishingly well-documented excavation of that period between June 1969 and June 1981 when gay men in New York experienced a bacchanalian burst of sexual liberation.

The faces of that movement are what sell this story -- with enthusiasm, not regret.

The pure filmmaking lets the people tell their stories with honesty and insight.

This is an immersive documentary, evoking the period, and arguing the case that although the unbridled hedonism did bring dangers and problems with it, there was also something of a idyllic euphoria experienced by those in this first wave of gay freedom.

Shows us the faces of some of the gay activists involved with that free love party scene who survived.

An unapologetic and accurate snapshot.

creating much more nostalgia than substance

The only clear message is of aging men enjoying a nostalgia trip... and thumbing their noses at the younger gay men who missed the party.

Audience Reviews for Gay Sex in the 70s

I'm biased towards this doc, as it is the only film I've screened in weeks (and I average 5 movies per day) during which I did not briefly think or seriously consider "Yeah, I'll watch the rest of this later. Right now, I'm puttin on a porn and wanking instead". This doc had all the eye candy I needed to keep my complete mental attention, but that said, it is also an honest and illuminating examination of gay cruising scenes in the 70s up until the AIDS crisis. This is mostly a compilation of various interviews, and I can't recall any annoying overdone narration. This is an important document not just for gay men, but also anyone in human sexuality studies. And great asses abound ;D

Really interesting title. By the way it means mostly Gay Men. And apparently people would photograph all of the secret underground places where men would meet. Also..I didn't fully grasp the weight of everyone pulling together so much in the wake of the HIV/AIDS epidemic..so really interesting film.

Gay Sex in the 70s Quotes