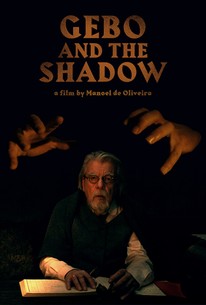 An adaptation of a 1923 play by Raul Brandão, Portuguese master Manoel de Oliveira's latest feature film gathers an All-Star team of European acting legends - including Claudia Cardinale, Jeanne Moreau, and Michael Lonsdale. Oliveira is unequalled among living filmmakers for his devotion to the theater, and for his ability to honor the theatricality of the texts he adapts while still creating works that are highly cinematic and profoundly modern. GEBO AND THE SHADOW is a highly-focused, deeply melancholy demonstration of his art.(c) Anthology

News & Interviews for Gebo and The Shadow (Gebo et l'ombre)

Critics Consensus: Maleficent is So-So, But Jolie is Great

View All Gebo and The Shadow (Gebo et l'ombre) News

Critic Reviews for Gebo and The Shadow (Gebo et l'ombre)

'Gebo' is an elemental thudding back to earth, body and soul entombed inside a dimly lit abode.

An intriguing minor composition by a shrewd and skillful master of the art.

Gebo and the Shadow is a film about concrete, hard, and material things, as well as one about illusions. Its dramatic elements are simple.

The devastating yet logical closing scene is delicious in its poetic symmetry and irony.

It defines Manoel de Oliveira's late period, during which his movies have continued to shrink in size and scope while remaining thematically expansive.

De Oliveira concocts striking images in very confined spaces, leaving us with a film that should feel cramped and claustrophobic but instead feels consistently vibrant and alive.

It may be directed by the world's oldest director, but it's one of Oliveira's most potent and rewarding titles from this late portion of his career, as well as an indication that he's lost none of his talents as one of the world's notable directors.

An exquisite yet anguished spectacle, a grand piece of cinematic chamber music for a cast of mighty soloists.

There are no featured reviews for Gebo and The Shadow (Gebo et l'ombre) at this time.