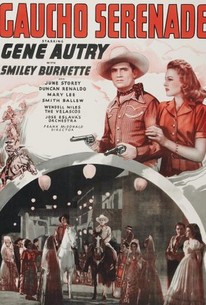 Gaucho Serenade, a Gene Autry vehicle, is not so much a western with music as a musical with a just a pinch of the sagebrush. Autry ambles into a frontier town, sings several songs to leading lady June Storey, gets involved with local intrigues involving a trouble-ridden ranch, and doesn't mount a horse until reel five. Then he doesn't punch anyone until reel six. And then, no gun is fired until ten minutes before the fadeout. Contemporary critics had a heap of fun complaining about what didn't happen in Gene Autry's westerns. Republic Studios didn't care, so long as the patrons plunked down their money--which they did for Gaucho Serenade and all the rest of Autry's 1940 releases.

Jim Corey
as Henchman on Train

Buck Bucko
as Henchman
View All

There are no critic reviews yet for Gaucho Serenade. Keep checking Rotten Tomatoes for updates!

There are no featured audience reviews yet. Click the link below to see what others say about Gaucho Serenade!