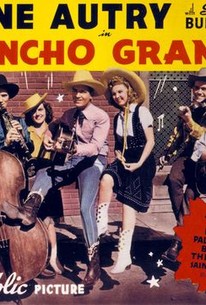 East meets west in this musical western starring singing cowboy Gene Autry. After the death of its owner, the financially troubled Rancho Grande is left to Kay Dodge (June Storey) and her siblings Patsy (Mary Lee) and Tom, (Dick Hogan), three wealthy young socialites from the East who are as unfamiliar with life on the range as they are with hard work and financial responsibility. Ranch foreman Gene (Gene Autry) has the unenviable task of giving the Dodges a crash course in running a ranch, and pitches in to help when they decide to turn the cattle operation into a "Dude Ranch" resort. Kay's lawyer Emory Benson (Ferris Taylor) encourages her in her plans, not knowing that he's also working with a group of farmers who are poised to take over the ranch if it fails; in order to hedge his bets, Benson hires a group of ne'er-do-wells to destroy the ranch's new irrigation system, and Gene and his fellow cowpokes must stand up and fight to protect their land. Rancho Grande includes musical numbers from Mary Lee and Smiley Burnette as well as Gene Autry.

Pals of the Golden West
View All

There are no critic reviews yet for Rancho Grande. Keep checking Rotten Tomatoes for updates!

There are no featured audience reviews yet. Click the link below to see what others say about Rancho Grande!