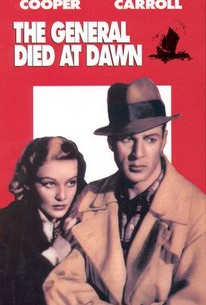 The General Died at Dawn Photos

General Yang (Akim Tamiroff) is a politically ambitious Chinese bandit who holds the Northern districts in a grip of terror. Yang is opposed by O'Hara (Gary Cooper), an American mercenary who fights on behalf of the peasants. When he is entrusted with a large sum of money to buy guns, O'Hara becomes the target of Yang and his minions. Betrayed by a cowardly Caucasian (Porter Hall), O'Hara nonetheless falls in love with his betrayer's daughter Judy (Madeline Carroll). Yang captures both O'Hara and Judy and spirits them away on his junk, where the General intends to torture O'Hara so as to find out where the money is. A bizarre and gloomy ending caps this atmospheric thriller, adapted from Charles G. Booth's best-selling novel by Clifford Odets--who, along with director Lewis Milestone, novelist John O'Hara and Hollywood columnist Sidney Skolsky, appears as an extra in one scene.

Dudley Lee
as Waiters on Train

Walter Lem
as Waiters on Train

Thomas Lee
as Waiters on Train

Tom Ung
as Steward on Train

Lewis Milestone
as Reporter
View All

Critic Reviews for The General Died at Dawn

The film is excellently directed, acted, and lighted.

Gary Cooper has never been better than in this picture, not even as Mr. Deeds, and has never had better support than he gets from all the players.

Disregarding historical facts, this romantic historical adventure was a good vehicle for Gary Cooper, then at th eheight of his career.

The General Died at Dawn (1936) is an adventure film set in the northern Chinese provinces that are torn by civil war, unrest, and revolution.

Audience Reviews for The General Died at Dawn

There are no featured audience reviews yet. Click the link below to see what others say about The General Died at Dawn!

The General Died at Dawn Quotes