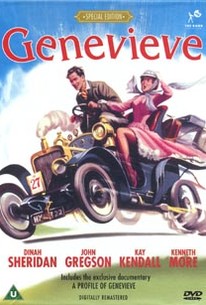 The plot of the thoroughly captivating British comedy Genevieve can be summed up in a sentence: Two young couples participate in the Vintage Car Rally, a yearly race from London to Brighton. The title "character" is the 1904 Darracq auto owned by John Gregson and Dinah Sheridan. The couple's friendly rivals are Kenneth More and Kay Kendall, the latter graduating to stardom on the basis of this film. At first treating the race as a lark, the two couples become increasingly--and hilariously--competitive as they near the finishing line. Among the film's plethora of small pleasures are Joyce Grenfell as a wry hotel proprietress and Arthur Wontner as an elderly car fancier. Despite the many technical gaffes and continuity errors overlooked by director Henry Cornelius, Genevieve is a uniquely British delight from beginning to end, its charm enhanced by the uncredited harmonica score of American expatriate Larry Adler. The film was a moneymaker in every country that it played, and a multi-award winner in England and abroad. ~ Hal Erickson, Rovi

Leslie Mitchell
as Himself

Michael Balfour
as Conductor
View All

A picture that packs a laugh a minute.

Some of it is repetitive, but the genial yarn stays in high gear from start to finish.

This lively comedy is one of the best things to have happened in British films over the last few years.

english through and through